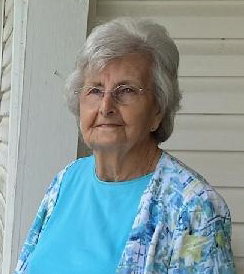 Mary F. Stephens, age 92, received her wings to travel home to be with her Lord and Savior on Monday, May 30, 2022. Both of her daughters were with her.

Mary was born April 23, 1930, to Elbert L. and Frances Green Robinson. She was the last surviving sibling of the Robinson family. She worked and retired from Florida State Hospital after many years of service as a Vocational Training Supervisor in the Sewing Skills Workshop. Mary was known for her sewing, crafts, baking, and crocheting, making items and gifting to anyone needing a mask during Covid, items for the NICU, and caps for the elementary school classes. As a seamstress she made clothing, including cheerleading uniforms for CHS, costumes, alterations, as well as anything her grandchildren and great-grandchildren could imagine. She continued to do this until early this year. Her hands were never idle.

Mary was a kind and gentle person, a woman of great faith. She was a founding member of Grace Community Baptist Church and a member of the Jewell Rae’s Mission Group of First Baptist Church Chattahoochee.

Married 60 years to James O. (J.O.) Stephens, who predeceased her in 2007. She is also predeceased by her three sisters; Katie Nell Grimsley and her spouse R.P., Ada Ruth Hamilton and her husband William, Edna Munson whose spouse Clifford Munson is the only remaining one of the family; one brother, Robert L. Robinson, and spouse Sara.

Survivors include her two daughters, Virginia Stephens Jones of Panama City and Beverly Stephens Mabardy and spouse Charly Mabardy of Chattahoochee; her loving grandchildren, William O. Jones of Panama City, Kristy Ward and Husband Matt Ward of Tallahassee, and Ginny Osborn and Husband Paul Osborn of Havana; great grandchildren, Dylan Osborn and Blake Ward who would always light up her life. She is also survived by one brother-in-law of the Stephens family, Coley G. Stephens; a host of nieces and nephews from the Robinson and Stephens families, as well as an adopted granddaughter Sheila Blount and her good friends, Betty Barfield and Phyllis Baxter who became one of the family.

The family would like to extend a heartfelt thank you to the staff of Covenant Care Hospice for the special love and care shown to Ms. Mary and the family during her final days.

A funeral service will be held on June 3rd, 2022, at 2:00 PM Eastern Time at Grace Community Baptist Church with visitation one hour prior to the service. Interment will follow in Mount Pleasant Cemetery where she will be laid to rest next to her husband, J.O.