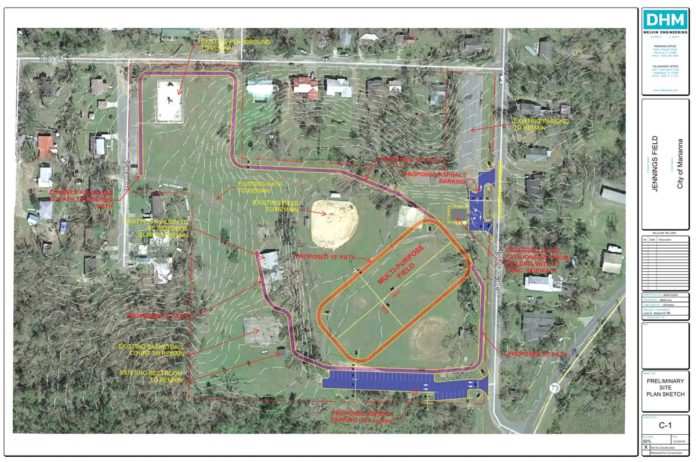 The Marianna City Commission heard from Marianna Recreation Director Clay Wells in reference to Jennings Field.
Wells said his department had been asked to come up with some ideas about what they would like to do with Jennings Field after the storm, what they would like to see. With the help of Mary Margaret Farris from Melvin Engineering, he presented the ideas Tuesday night at the regularly scheduled city commission meeting.
Wells said what he was presenting was what they have envisioned from some of the thoughts of people in the community and from some of the city commission and personnel. “This is a preliminary drawing of what we have come up with and it’s up for discussion.”
Wells presented a preliminary site plan sketch of Jennings Field and discussed the improvements that were up for discussion. “One of the main things that was damaged by the storm was the pavilion. The pavilion was completely destroyed and what we have proposed is to move it down next to Caledonia and to put in parking around there. We want to make sure that we have handicapped parking there. We want to utilize the paved surface as a parking area there instead of it being up on a hill that was not accessible to parking. Another thing we heard a lot about was a track. We don’t have the space to put a regulation track. Mrs. Farris has looked at it several different ways. We have a nice track with a multipurpose field in the middle of it.”
Wells said one thing he wanted to make sure remained in its location was the small, upper baseball field. Wells said, “As many of you know Jennings Park was the first baseball field in Marianna, people in Marianna remember that well.”
Wells talked about the doing something like adding a splash pad, a playground to enhance the park as it is the first thing you see coming in to Marianna. He talked about repairs to the bathrooms, and possibly utilizing the slab from the destroyed pavilion for skateboarders.
Commissioner Travis Ephraim said he would like to see Jennings Field complement the other park the city has. He said he would also like to see a dog play area that he’s not seen that would be exclusively for pets.
Commissioner Kenny Hamilton inquired if vehicles would be able to get out of the parking areas into the park. Wells said no they would not, the area would be sealed off.
The question was raised about where the money would come from. City Manager Jim Dean said there was some insurance money and they would be applying for FRDAP grants and told them it would be a phased project.
There was some concern about the upkeep of the bathrooms with the ones right in downtown having issues of vandalism. Dean said they would have to be kept locked unless the facility was rented out or the city had an event there.
The Board of City Commissioners thanked Wells for his diligence in preparing the tentative plans for Jennings Field.