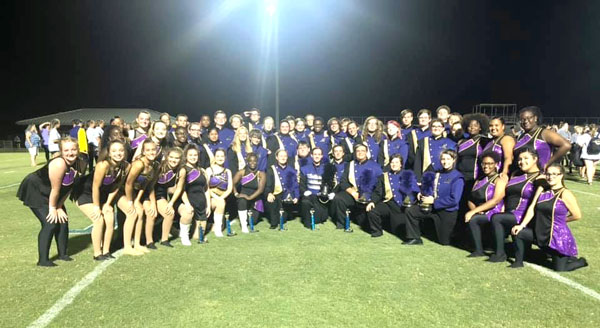 The Marianna High School Band, ‘The Pride’ has shown resiliency like no other in recent memory. They have struggled with band director turnover in recent years, but it is common knowledge that they will all agree, they have found their match with Daryl Williams. Williams wasted no time in coercing former band director and music man Royce Reagan into assisting, brining years of leadership to the table.
Williams stepped up when the time came. After hearing of the opening for a band director, Williams immediately offered his services to host the band camp held in the summer months. There was no money for this, only his desire to have the band succeed. His education degree was not in music, but he knew to call on for help. Extra kudos to Daryl Williams for all of his hard work and efforts.
This past weekend, after seven halftime shows, they traveled to Rehobeth Saturday to compete in the Rehobeth Marching Festival.
It was a challenge that the band has been working towards since band camp. This festival not only allowed the band to perform in a competition with almost 30 other bands from the surrounding areas, but gave them an outside opportunity to hear from clinicians that gave the band pointers to prepare them for their District Music Performance Assessment on October 19.
They came away with a Superior Rating in ALL sections of their performance. They have been led by Band Director Mr. Daryl Williams, majorette coach Ashley Tiller, dance coaches Meghan Basford and Dianna Floyd, and guard coach Allison Williams.
Congratulations to the Marianna High School Band on your Superior Rating from the Jackson County Times!