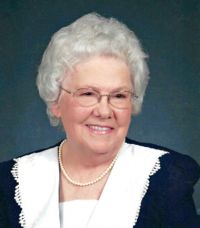 Ms. Lillie Virginia Fowler Nichols was born in Cook Bayou, Florida, October 27, 1917 to the late James Jefferson Fowler and Sarah Ona Lee Ligon and lived to be 101 years old. She passed away peacefully on March 29, 2019 in the home of her daughter Barbara Peacock. She was preceded in death by her husband Franklin Nichols, her brothers Vennie, Oba, Tommy, Elbert, Clyde, Fred, and her twin sister Linnie Lou Fowler; as well as a grandson Scott Pybus.

Survivors include her daughter Barbara Peacock and her husband Eugene of Marianna, and her son Roger Nichols and his wife Rae of Clarksville; as well as six grandchildren Brenton Peacock, Stacy Peacock, Kim Williams, Jeffery Peacock, Greg Pybus, and Jim Pybus. She has also survived by ten great-grandchildren, five great-great-grandchildren, and one sister-in-law Winona Morris, the only survivor of her generation.

Funeral Services were held at Poplar Head Baptist Church in Clarksville, Florida at 2:00 P.M. on April 1,2019, with Adams Funeral Home in charge of arrangements. Online condolences can be made at adamsfh.com 850-674-5449.