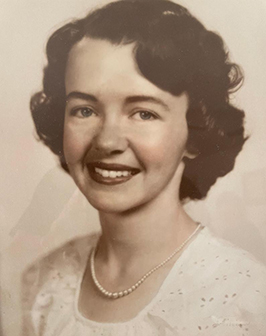 She was preceded in death by her parents, William D. Henderson and Ossie Ingram Henderson, her husband, Edward L. Morris, brothers, Barnes Henderson, Harvey Henderson and Jack Henderson; and a sister, Brunice Henderson.

Born June 18, 1929, in Madrid, Alabama, Lillian was a child of the Great Depression, but she and her siblings grew up rich in love and character. She graduated from Cottondale High School in 1947, and subsequently worked as a bookkeeper and competed in the Miss Pensacola contest in 1949. Love called her to travel to Colorado to marry her sweetheart, Edward Morris on November 12, 1949, and they were love-matched couple until his passing in October of 2010.

She and her husband came home to Jackson County after a few years and built a home on the very spot near Kynesville, where Edward was born. She was a caring, loving, and devoted wife and mother. She always encouraged her two sons to pursue their dreams while being true to their upbringing.

A member of Bethlehem Baptist Church in Kynesville since 1963, she had an unshakeable faith and was a quiet inspiration to all who knew her. Her modesty and quiet nature, however, covered a core of strength and faith that enabled her to handle all of life’s challenges. She was a true Steel Magnolia of grace, charm, and strength.

The family will receive friends one hour prior to the funeral service at Bethlehem Baptist Church.