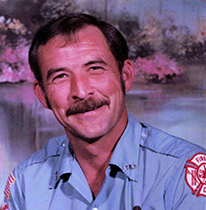 Leon Carroll Hall, 76, of Grand Ridge, Florida passed away peacefully on Friday, July 29, 2022, at the Marianna Health and Rehabilitation Center surrounded by his family.

Funeral Services for Mr. Hall will be held in the chapel of McAlpin Funeral Home in Sneads, Florida on Friday, August 5, 2022, beginning at 3:00 PM central time with Rev. Jimmy Wright officiating. The family will receive friends one hour prior to the service.

Leon was the son of Joy Buford and Alma Mayo Hall. He was born in Calhoun County Florida in 1945 and later, sometime during his second-grade year in school, his family relocated to Jackson County where he remained. Leon spent thirty years of his life in dedicated service to the State of Florida as a Firefighter at Florida State Hospital. After retirement as a Firefighter, he was able to spend more time sharpening up on his fishing and carpentry skills, both of which he loved to do. He was a man who enjoyed working with his hands. Leon was also known for his conversation skills; he never met a stranger. He also enjoyed fox hunting with his dogs and working in the yard. Leon was a good ol’ boy who enjoyed a simple life. He worked hard, played hard and had many friends. Leon will be missed by all who knew him.

Most important to Leon was his family. He is survived by his precious wife of 27 years, Barbara; children Todd Hall and his wife Lisa, of Sneads, Toni Doll and her husband John of Havana, Jason Folsom and his wife Jami of Grand Ridge, John Pitts and his wife Kristine of Ashford; a sister, Billie Rogers and her husband Curtis; two brothers, Obie Hall and Donnie Hall and his wife Pat; eleven grandchildren, Cash, Joncy, Casey, Kenley, Trace, Tucker, Raven, Morgan, Jacob, Joshua, and Joey; four great grandchildren and many other extended family members and friends, as well as his faithful canine companion, Freckles.

Leon was preceded in death by his parents; a son, Tracy Carroll Hall “Blue” and a brother, Wendell Hall.

The Hall family would like to extend a heartfelt thank you to the nurses, doctors and staff of the Marianna Health and Rehabilitation Center who cared for Leon and for them during these last few weeks.