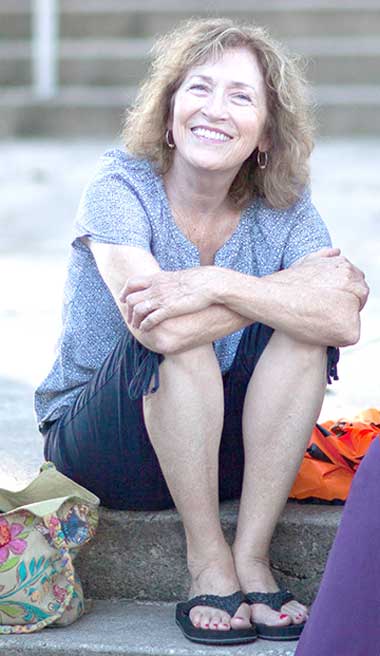 Kay Sellers Trammell died peacefully January 29, 2020, at Big Bend Hospice in Tallahassee, Florida, after a 19-month fight against Stage IV ROS1 NSCLC (nonsmokers’ lung adenocarcinoma). She was 74.
Kay was born in Dothan, Al. and grew up in a farming community in Jackson County near Campbellton, Fl. called The Forks of the Creek, At Kay’s childhood home, there were always visiting family. Neighbors dropped by to shell peas while catching up on news and laughing loudly. Her parents, Douglas and Melvie Sellers, were as hardworking and honorable as they were fun. During post-WWII years, Kay lived an idyllic childhood and began school with lifelong pals.
Kay graduated Campbellton High School in 1963 with many of the same friends she had at the beginning.
After her graduation from CHS, where she was valedictorian, Kay attended Chipola Jr. College in Marianna. She met a basketball player from Blountstown named Robert Trammell. He was smitten. Robert pestered her until she had a free Friday night to go on a date with him and the rest is history. Kay’s family truly became Robert’s family, in spite of her paternal grandfather lamenting, “Robert is a great young man; if he just weren’t from Calhoun County.”
In spite of this, Robert became a son Kay’s parents never had. Kay and Robert courted for a few years and were married on August 13, 1966, at Campbellton Baptist Church. They lived in Tallahassee where they both received degrees. Kay graduated in 1966 with a B.S. degree in Early Childhood Education. She was a teacher at Oak Ridge Elementary School and Sabal Palm Elementary School in Tallahassee, where she loved working with children. During this time, Robert was a basketball coach at Leon High School and then FSU. They had their first child, Meredith. Soon, they moved to Mobile, Al., where Robert got a job as an assistant coach at the University of South Alabama, and Kay taught at Indian Springs Elementary School. They had their second child, Robert Douglas.
Kay loved music and movies, a passion she got from her parents and shared with Robert and their two children. Kay was called upon to be a very strong mother, as Robert had to go on many recruiting trips. Eventually, Robert had to move away for three years of law school. Kay kept the children on task, worked long hours teaching school, and when her mother became ill with cancer, she drove the two kids back and forth to Marianna to take care of her.
Kay and Robert moved their family to Marianna after Robert graduated from law school at The University of Mississippi. Robert practiced law and was in the Florida House of Representatives with Kay as his de facto campaign advisor. She helped Robert consider issues, solve problems, execute logistics, diffuse stress and provided the backbone. He always let her know that she was the brains and the strength of his occupational positions. She also made time to form many friendships, stay involved in her children’s lives, serve on many nonprofit boards, devote countless hours to volunteer work to help others and causes near to her heart. She wrote the grant to save the round Russ House on Highway 90 in Marianna. Kay served as a Deacon at the First Presbyterian Church in Marianna, and went back to school to receive a Masters of Science in Education in 1992 at Troy State University in Dothan, AL.
In 2000, Kay and Robert moved to Tallahassee, where Kay continued to be devoted to her family, especially helping raise her three grandchildren, who adored her from birth. She was involved in volunteer work at Faith Presbyterian Church, the Faith Presbyterian Preschool and Kindergarten Board of Directors, Habitat for Humanity, countless nonprofits for animals and the environment, and others. She always carried restaurant gift cards in her wallet to give to homeless people she saw at intersections. She always had time to show she cared to everyone she encountered throughout her days and even when she had received her cancer diagnosis, her main objective was to work to gather and deliver supplies to the Panhandle counties affected by Hurricane Michael. She fought hard to live during her battle with cancer and never complained. Kay enjoyed every day she could, sitting in her courtyard smiling amongst her beloved plumbagos, listening to the birds she loved, and swaying to her music which was always good rock, r&b, funk, or reggae. Her love for life, her family, and all that is good remained evident until the end.
She is survived by her devoted husband, Robert D. Trammell; her daughter, Meredith Trammell (Daniel Pineau), Tallahassee; her son, Robert Douglas Trammell of New Orleans, LA; three grandchildren, Mirabella Emile Trammell, Ava-Kay Cecilia Trammell, and Jack-Douglas Kennedy Trammell, all of Tallahassee; her sister, Carol Sellers Rodgers (Eddie) of Dothan, AL; and a niece, nephew, their families, and many cousins.
There will be a visitation at Faith Presbyterian on Sunday, February 2, 2020, from 3:00 to 5:00 p.m. EST. Faith Presbyterian is located at 2200 N. Meridian Rd. in Tallahassee. The service to celebrate the life and spirit of Kay will be held on Monday, February 3, 2020, at Faith Presbyterian Church at 1:00 p.m. EST; followed by a graveside at the Atkins Family Cemetery in Calhoun County at 3:30 CST. In lieu of flowers, the family asks that any donations or gifts be made to “Targeting a Cure For Lung Cancer” at Massachusetts General Hospital- Development Office, Attn: Keith Erickson, 100 Cambridge St., Suite 1310, Boston, MA 02114 (or online at: http://www.giving.massgeneral.org/target and you may designate at the bottom of the online form that it’s a tribute to Kay Trammell); or to the Tallahassee Animal Shelter Foundation, Inc., at P.O. Box 13858, Tallahassee, FL, 32317 (or online at https://animalshelterfoundation.org/help/donate ), both of which are causes that were extremely important to Kay.
Charles McClellan Funeral Home, 15 S. Jackson St., Quincy, FL., 850-627-7677, is in charge of arrangements.