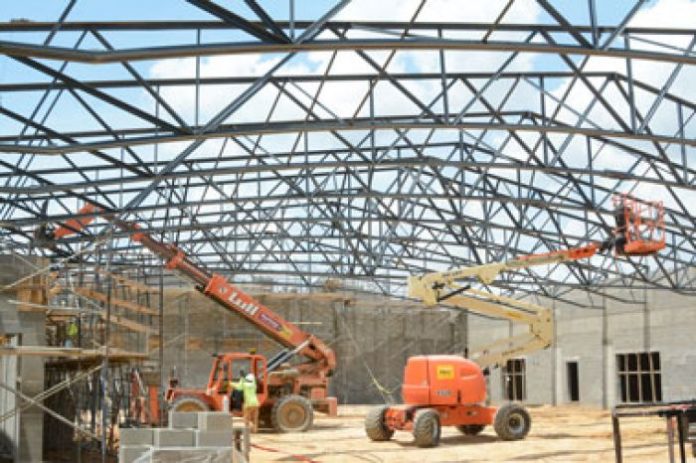 Jackson County School Board Director of Facilities and Construction, Stuart Wiggins is pleased with the progress being made on the construction of the K-8 school located on Caverns Road.

He was pleased that the dining hall is now beginning to take shape with the foundation poured and rafters and beams going up. The dining hall is adjacent to the kitchen and will double as a multi-purpose room. Wiggins said, “We will be able to feed several classes of children in there and when we take the tables out and just put chairs, we will be able to seat the entire school to watch anything that would be on the stage. It’s going to be pretty big.”

Stuart outlined the complexity of the cafeteria/dining hall, “With this school being a K-8, there will actually be two separate dining areas with a moveable wall.  The larger dining hall will be elementary which will be K-5 and then the six through eight will be on the smaller side.”

The elementary (K-5) will not have a gym per se but rather a physical education facility. They will begin work on that following the completion of the middle school gym.  The elementary classrooms will be four separate hallways that will be tied together down to the administration media center wing.

About the completion date, Wiggins said, “We still have May 14, 2020 as our completion date and even though we are two weeks ahead of schedule, we are sticking with that date. This gives us plenty of time to move the three schools into this building prior to school starting in August of 2020.  We are about 14-15 months away from being finished.”

Moore maintains optimistic about the K-8 school About the consolidation of the three schools into one K-8 school, Moore said, “It is a much-needed move and a cost saving measure. It will be well over $1 million a year that we will be able to realize in actual savings. It will be a major boost to the Jackson County School system just from an operational standpoint.”