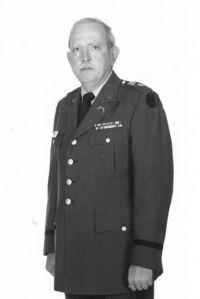 Lieutenant Colonel USAR Joseph Michael Hamm, 69, surrounded by family, passed away on March 10, 2019, after a brief illness with cancer.  Memorial services will be held on Thursday, March 14, 2019, at Culley’s Funeral Home on Riggins Road, Tallahassee, Fl.  Visitation will be held from 11:00 am until noon, with a memorial to be held from noon until 1:00 pm, followed by  military services at 2:00 pm at Tallahassee National Cemetery with military honors.

Michael  was born on September 12, 1949, in Marianna, Florida, to Joseph Grady Hamm, Jr., and Eloise Hollis Hamm.  He attended school in Marianna, graduating from Mariana High School in 1967.  He excelled academically, as well as in sports.  He attended Chipola Junior College on a tennis scholarship, graduating in 1969.  He attended Florida State University and graduated in April 1971 with a B. S. in Criminology.  While attending FSU, he was active in the Army ROTC and following  graduation and completion of basic training was commissioned a Lieutenant, starting a 28 year career in the Army Reserves.

In 1972, Michael began working with the State of Florida, starting as a probation officer with DOC, and later moving to the Florida Parole Commission where he finished his 35 year career as a Regional Administrator.

Michael loved fishing, duck hunting, Florida State sports, and preparing his special food dishes for others, especially ducks and shucking oysters.  Most of all, he loved spending time with his family and friends.

He is survived by his wife of 25 years, Pamela Henderson Hamm.  He is survived by his children and grandchildren, including daughter Paige Hamm (Matthew) Cohen of Wesley Chapel, step-daughters Anne Eldridge (Charles) Harden of Sopchoppy and Dana Eldridge (Wrenn) Harvey of Crawfordville, step-son Matthew (Jessica) Eldridge, and grandchildren Jonah and Marina Harvey, Valerie, Chance and Sarah Harden, and Elijah and Levi Cohen.   Also, he is survived by his father, Joseph Grady Hamm, Jr., his brothers Danny (Sandra) Hamm and Kenny (Cathy) Hamm all of Marianna and his sister Belinda (Rick) Boedy of Big Canoe, Georgia, as well as their children.

The family wishes to thank Big Bend Hospice, especially Ida and Becky, for this compassionate and loving care during Michael’s illness.  In lieu of flowers, donations in Michael’s memory can be made to Big Bend Hospice,  the American Cancer Society,  or a non-profit of one’s choice.