Jackson County Fire Rescue Chief Charlie Brunner just returned from a one-day seminar at Florida State Fire College in Ocala. Brunner was nominated to serve under the Florida Fire Chiefs Association as a representative for Region I for the paramedic shortage and firefighter recruitment retention committee for the State of Florida.
Brunner was very honored to have been chosen to serve in this capacity. He said about the challenge, “It’s a state-wide initiative because fewer people are entering this career field. It was taking all our brains to define recruitment and try to problem solve recruitment. Then retaining people in this career field. A lot of people leave the fire service to go into nursing, into private business, you see them really get out of this career altogether. You wonder what it is, was it a bad call, an accumulation of bad incidents that they worked.”
Brunner said mental health is an issue, a number one reason people exit this field because of what they see and what they are exposed to daily. “We have to ask is the state doing their part in providing mental health resources to first responders. That is one of the big initiatives along with the cancer, the firefighter cancer issues.” He said a lot of the exiting is because of the high incidents of cancer, high risk of cancer, “You know we just had Chief Newsome’s funeral. People that have that aggressive cancer at 50 years old was probably a direct exposure to the job. A lot of the new generation is saying it’s not worth it to be in this type of field if you have that much risk to increased exposure to cancer.”
Brunner said, “Under CFO Jimmy Patronis, they have done a huge initiative with cancer benefits, cancer awareness for firefighters in Florida. We are one of the leading states in the United States with cancer initiatives for firefighters.”
He said they have not defined recruitment across the state. He said the reason recruitment is low across the state is due in part to the lesser number of people entering this particular work force. Brunner said Polk County is one of the fastest growing area in the state of Florida population wise, “We sat down with the Polk County fire chief and what we found was they don’t have enough people entering the work force to keep up with the growth in their community in a 2000 square mile county. It’s such a large growth, retirees are the people who are moving there. So, emergency services have to be one of the forefront of services they keep up. It’s not always that people are not wanting to enter the workforce. They have 100 open positions in Polk County because they are rapidly growing and expanding.”
Brunner said there are different challenges to recruiting, whether it’s a rural area, or even the larger areas, they are all having difficulty. He said they broke into four groups and each of those four groups had a representative from each part of the state. Brunner and Chief Terry Parris from Panama City Beach Fire Rescue and they had a fire department that does ambulance transport which is JCFR and then a fire department that did not do medical transport like Panama City Beach. He said each one of them represented a region for the Florida Fire Chief. Each group had a region and a college attached to their group. Brunner said they discussed whether or not Florida had reciprocity from other states if qualified individual were to move into Florida. Another issue with reciprocity is if that process is clear cut because if not and if it is cumbersome, they’ll find a different job rather than going through the hassle. Brunner said, “It’s important that we don’t miss the opportunity for qualified workers. They are basically going to lay out a cookbook of sorts, of step-by-step issues you have to go through if you come from another state.” He said that Jackson County is fortunate to have a firefighter academy at Chipola College.
Brunner said, “There was probably 25-30 of us from across the state that we got to really sit and talk in a round-table discussion. We started bright and early in the morning, worked through lunch, and it was good to work and talk with people who have the same struggles. A lot of times people think it’s the money but there are people in larger towns who have trouble filling the same positions where money isn’t the issue. It’s getting people excited about this job and knowing there is longevity in this career and now with the governor and the CFO there is a lot of backing with the mental health awareness and the cancer issues to save you on the back end.”
Brunner remains hopeful that Jackson County will stay ahead of the game with recruiting and staffing at Jackson County Fire Rescue. 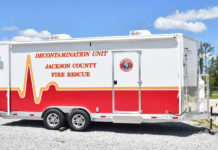