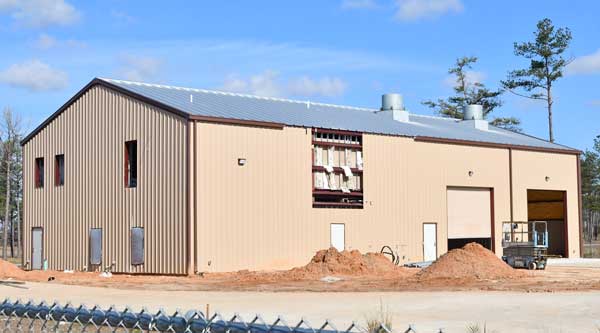 The Jackson County Fire Rescue is closer to completion thanks in part to the aggressive action of Chief Charlie Brunner. Brunner took over as chief of the department in January of 2018 and inherited many obstacles prior to Hurricane Michael. The building on Commercial Park Drive has had numerous delays due to a variety of reasons.
Initially, Sheriff Lou Roberts had requested the 9-1-1 center be located there, however it is now being housed at the new location of the sheriff’s office at Endeavor. That made it necessary to make architectural changes to the building causing one of the delays. Hurricane Michael and its aftermath caused a huge shortage of labor, forcing another delay in work on the building.
Brunner addressed the Board of County Commissioners in July with good news that work on the fire station was progressing nicely and systems were indicating it would be ready for occupancy in October. Glitches happened, work halted and no workers could be found on site. Brunner contacted GAC last week and was pleased with the answers he received. GAC assured him a new superintendent would be on the premises Monday and work would begin to complete the project. Of concern was the damage done by rain and wind to sheetrock and insulation left unsealed by previous work crews. Brunner addressed this at his meeting and was assured all of that would be replaced at no cost to the county. He said he was told they had to leave it open because they still had to run the HVAC lines and that had to be open. Brunner said they still have a lot of stuff left to do including installing the fire sprinkler systems but the promise of workers being on property Monday was encouraging that the building would be completed soon.
Brunner said this week they will also be moving from the temporary building in Alford to the City Hall. Brunner said, “George (Gay) built us kind of like an apartment flat inside City Hall because they were leasing the old office space from the old railroad company. When City Hall was destroyed, that meant that they had to gut it. When inspectors came, they determined that the building was still good to use and they put a new roof on it, left the front part for City Hall business with the back half leaving one bay for the ambulance and the other a small area of living quarters for the EMTs.” Brunner said the City of Alford actually has plans to build a Volunteer Fire Station.