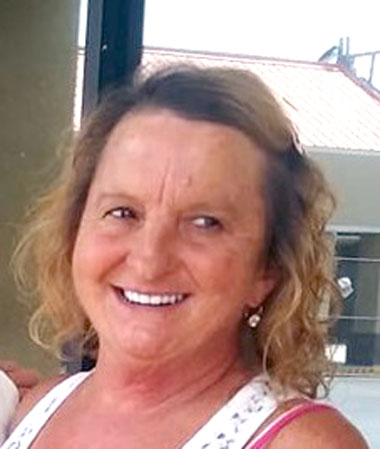 Janet Fettinger age 55 of Alford, passed away on Wendesday, August 28, 2019 in Gulf Coast Medical. She was a native of Jackson County, born in Marianna on September 8, 1963. Janet lived life to the fullest. She enjoyed cooking and spending time with family and friends.
Janet was preceded in death by her father, John L. Mayo and mother, Alice Barnes Drinkwater; one brother, Daniel Mayo.
She is survived by her husband, Ken Fettinger of Alford; daughters, Stella Cass (Brian) of Alford and Santana Ammons (Chris) of Alford; stepsons, Vince Fettinger (Dana) of Atlanta, Georgia and Rodney Fettinger of Pensacola, Florida; one brother, Danel Mayo (Jane) of Youngstown; sisters, Lorine Coulliette Davis (Ronnie) of Alford, Teresa Mcroy (Kenney) of Cottondale, Peggy Coulliette (Eddie) of Rocky Creek, Nellie Bell of Chipley, Elaine Whitehead of Chipley, and Judy Williams of Alford; grandchildren , Kenlee Ammons, Caden Ammons, and Kash Ammons of Alford, Grace and Garrett Fettinger both of Atlanta, Georgia, and David Mayo of Marianna. Janet is also survived by her second mother, Aunt Evelyn Syfrett, and a host of nieces, nephews, and other family members.
Funeral Services will be held at 2:00 p.m. on Sunday, Septemeber 1, 2019 in the Round Lake Baptist Church with Pastor James Barwick officiating. Burial will follow in the Williams Family Cemetery.
A time of visistation will be held from 6:00 p.m. until 8:00 p.m. on Saturday, August 31, 2019 in the Marianna Chapel Funeral Home.
Marianna Chapel Funeral Home is in charge of arrangements. Expressions of sympathy may be submitted on line at www.mariannachapelfh.com.