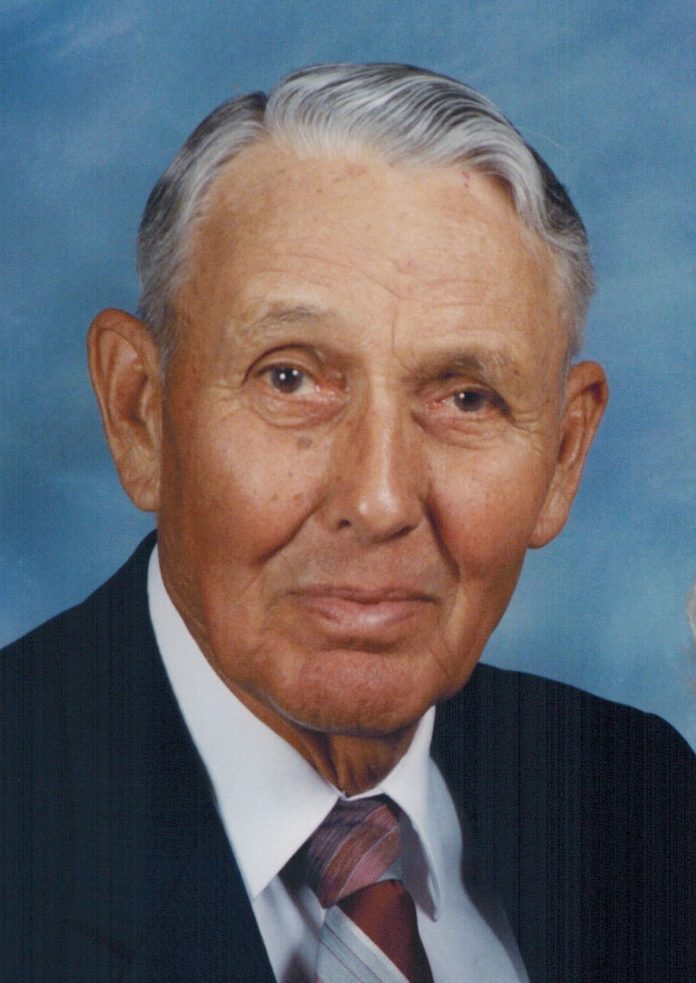 James Alton Clemmons was born at home just outside of Vernon, Florida on December 10, 1921 to Ernest Robert Clemmons and Florida Potter Clemmons whose ancestors before them were among the first pioneer families of the early 1800’s to inhabit what is now present day Washington County. When he was age 7 the family moved to Chipley, Florida and in his youth he professed faith in our Lord Jesus Christ and was baptized into the membership of the Holmes Creek Baptist church where the entire family attended. In 1942 he graduated Chipley High School as president of the student body and as president of the Chipley High School chapter of the Future Farmers of America. With World War II having just begun, he enlisted shortly after graduating in the U.S. Army and successfully gained admission into the U.S. Army Air Forces where after flight training he served as a flight instructor at Moody Air Field in Valdosta, Georgia. In 1944 he was assigned to four engine bomber training and was transferred to England where as a pilot in the 401st Bomb Group of the Eighth Air Force he flew bombing missions over Germany in the B-17 Flying Fortress bombers made famous in World War II’s air war over Europe.

After World War II ended, he attended the University of Florida on the GI bill graduating in 1949 with a B.S. degree from the University’s Institute of Food and Agricultural Sciences. In August of 1949 he married Dorothy Jean Tobias of Chipley and began working as farm manager for James A. Smith of Birmingham, Alabama who at the time owned an approximately 8000 acre tract of land in south Holmes and north Washington counties while his wife, Dorothy, taught school briefly in Bonifay and thereafter in Chipley and, then until retirement, at Chipola College.

In 1954 a son was born, James Allen and three years later, a daughter Edith Marie. Life was simple but involved hard work on the farm where all family members became involved in some way or another. In 1971 he completed building himself—over a period of three years—a new home near his aging parents just outside of Chipley where the family then moved. By the mid 1970’s, with the original owner of the farm land he had managed deceased and his heirs interested in dispersing the property, he financed and purchased the cleared portion on Douglas Ferry Road of the original tract which he continued to farm unto the present. Additionally in the 1970’s he became employed by the University of Florida operating their Beef Demonstration Unit located at the time behind Chipley’s Department of Transportation where he remained in that capacity until his retirement in 1986.

In retirement, he and his wife Dorothy pursued many interests including gardening and traveling to visit out of town family and then undertaking building another home, this time back on the farm property on Douglas Ferry Road where they then moved in 1991 to reside. Sadly afterward though, years of terminal illness claimed his beloved wife, Dorothy, but throughout those years he stayed at her side caring for her and performing her nursing care himself until her death in 2011.

Over the years since, his love for farming and gardening continued as his health permitted as did his love for serving in the First Baptist Church of Bonifay where, since he and his wife Dorothy joined in 1949, he has served in numerous capacities including deacon, Sunday School teacher, and serving on numerous committees. As a member of America’s now few-remaining but famous “Great Generation” his life reminded all who knew him of a time when quiet service, faith, hard work, and humility were characteristics of life that were simply expected. His devotion to living out that kind of life will be deeply missed by his family and all who had the privilege of knowing him.

Funeral Services will be held on Tuesday, June 23, 2020 at the First Baptist Church of Bonifay. Visitation will be held from 9:30-10:30 A.M. with funeral service to follow. Interment will be held at Glenwood Cemetery in Chipley, FL. In lieu of flowers the family has requested that donations be made to the Building Fund at First Baptist Church of Bonifay, FL. Brown Funeral Home of Chipley, FL is in charge of arrangements. Family and friends may sign the online register at www.brownfh.net