Deputies were in pursuit of an unknown number of individuals who reportedly fled when a traffic stop was attempted on Highway 90 near Cornsilk. Deputies reported there were outstanding warrants and two individuals fled. A third unconfirmed one may be at large according to JCSO. The vehicle was abandoned prior to deputies being in sight of it. Two are in custody at this time. As details are made available, the TIMES will update. 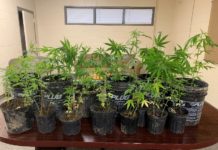