Jackson County Board of County Commissioners Chairman Clint Pate addressed the Board in their regularly scheduled meeting Tuesday in reference to the Second Amendment.
Pate said in following many other counties within the State of Florida, he felt Jackson County should adopt a resolution saying we support the constitution. Pate acknowledged that the resolution wouldn’t do a whole lot except that it would make the statement that Jackson County was for the second amendment.
Commissioner Jim Peacock made a motion to approve the resolution with a second by Commissioner Eric Hill.
Commissioner Chuck Lockey questioned what declaring Jackson County a second amendment sanctuary does that actually accomplish. Commissioner Peacock said, “It would let the people in the rest of the country know that Jackson County does support the second amendment and that we are willing to stand up and say this is an area where we believe in the second amendment and we do not want people coming and trying to take our guns.”
The news traveled quickly throughout Jackson County with citizens supporting the commissioners’ motion.
Marianna Police Chief Hayes Baggett said of the commissioners’ actions, “I am a strong supporter of all the rights afforded to us by the United States Constitution, especially the Second Amendment. I believe the Constitution is the ultimate framework for our government.”
Kevin Arnold, commander for the Jackson County Sheriff’s Office and a candidate for sheriff supports the commission, “I whole-heartedly support the second amendment. My family has had firearms for generations, I own firearms, my friends, law-abiding citizens were all given these rights by our forefathers when they made the constitution. If I am lucky enough to be elected sheriff, I will work hard to protect those rights. I am glad the county commission adopted that resolution.”
Donnie Edenfield has been in the criminal justice system his entire adult life and totally agrees with the commissioner’s actions, “As sheriff, I would hope I’d never have to deal with a legislative mandate which clearly contradicts the Constitution, but if I do you can rest assured that I will not trample on the people’s constitutional right, nor would I put my deputies in harm’s way by needlessly making arrests of otherwise law-abiding citizens in an effort to take their guns.”
Jackson County Sheriff’s Captain Scott Edwards and candidate for sheriff was much in favor of the commissioners’ actions, “As a law enforcement officer, I am 100% for our second amendment rights. And although what the commission did today doesn’t have much teeth in it, it shows Jackson County is supporting their right to support the second amendment.
Jackson County Sheriff’s Investigator Jeff Snell and candidate for sheriff was pleased with the commissioners’ action today, “I applaud the commission for their willingness to pass this resolution as a testament to their support of our Second Amendment rights. I stand resolute with these commissioners on this matter. If elected as your next sheriff, I pledge to stand strong against any effort to diminish our citizen’s constitutional right to keep and bear arms.”
Commissioner Willie Spires questioned who was proposing to take the guns. Chairman Pate said no one at this time but cited the issues in Virginia at this time was where the concern was coming from.
The motion passed 4-1 with Commissioner Willie Spires voting against. 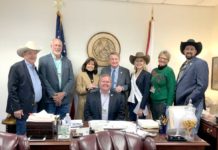 Cattlemen present for Boots on the Hill at the Capital 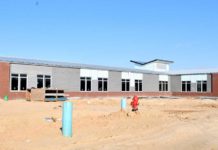 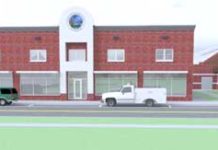