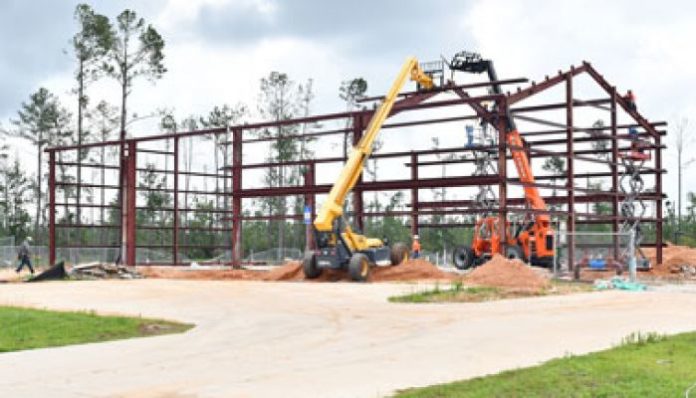 Delays, architectural changes, changes in personnel scheduled to occupy the building have all contributed to delays in the construction of the new Jackson County Fire Station that is scheduled to be located on Commercial Park Drive. Finally, and at the relief Chief Charlie Brunner and of many concerned citizens, construction has begun.

The TIMES spoke with Jackson County Fire Rescue Chief Charlie Brunner Wednesday morning and he was more than relieved to be moving forward, “This will serve as the new Jackson County Fire Rescue headquarters. The number system is a little different than originally numbered. This will actually be station number 22, but it will be our new headquarters.”

Chief Brunner said as far as who is housed there, “There will be one ambulance and one firetruck and then the administrative staff will also be housed on the bottom floor. The EMTs and paramedics will be housed upstairs.”

As far as plans for the rescue stationed at Industrial Park now, Brunner says, “We will keep one ambulance there and other fire apparatus to respond to both fire and medical emergencies.  We will still have an ambulance there so that way they can respond to Malone Greenwood, Two Egg, Dellwood and Bascom.”

That will bring the number of stations to five with one in Sneads, Alford, Campbellton and two in Marianna. Brunner says about plans to move a station to the northeast section of Jackson County, “With one being actually in the city limits of Marianna now, because the one at the Industrial (Commercial) Park is actually in the city limits, the county would like to look into that. I guess before I came on board, there were talks about moving an ambulance more to the northeast corner, not the actual corner but maybe somewhere centrally located in the unincorporated area like the Bascom area. That way it could respond back to Greenwood, over to Malone and to Dellwood and Two Egg.  Of course, that is depending on funding too.”

Asked about staffing conditions, Brunner said, “We are currently advertising for two full-time EMT firefighters and we have seven paramedic positions opened. We just filled one paramedic position or we are in the process of filling it now.”

Once again, with all the destruction, Jackson County is working towards rebuilding and the Jackson County Fire Rescue Station is just one more example of that.