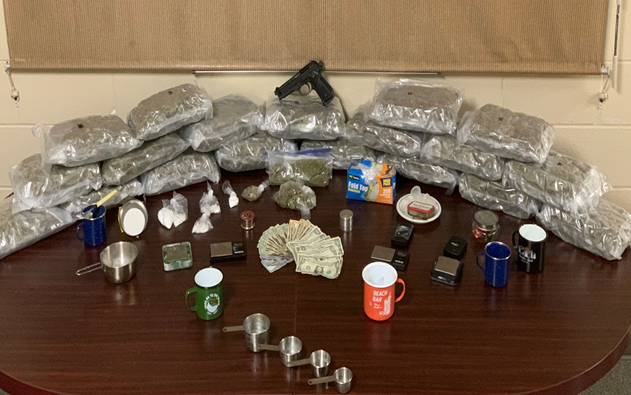 On Tuesday, September 1, 2020 The Jackson County Drug Task Force with the assistance of members of the Jackson County Sheriff’s Office Patrol Division, the United States Marshal’s Service Florida/Caribbean Regional Fugitive Task Force, the Jackson CI K9 Tracking Team and the Apalachee CI K9 Tracking Teams executed simultaneous search warrants in the Mt. Tabor community resulting in the arrest of one of Jackson County’s most notorious drug dealers, Erik Leronn Gammons (aka Ebay) and a host of his associated dealers, Darryl Dewayne Hayes (aka Manboo), Roy Hilton Porter (aka Tadpole), Ashley Smith (aka Big A), and Marcus Daughtry (aka Bubby). The search warrants yielded approximately 22 pounds of high-grade Marijuana, amounts of Cocaine (Powder and Crack) well in excess of Trafficking quantities set forth by Florida Statutes, a multitude of Crack Cocaine paraphernalia, a quantity of US Currency, and a firearm. During one of the search warrants, some of the defendants were found to be actively in the process of cooking Crack Cocaine. The search warrants came as result of a long-term investigation that led to 14 individual arrest warrants being issued on Gammons (3), Hayes (9), and Porter (2). The investigation was initiated as a result of numerous citizen complaints and Crime Stopper Tips. The investigation is ongoing and additional associates of this Drug Trafficking Organization have been identified. Arrests for these associates are forthcoming.

Sheriff Lou Roberts would like to extend his most sincere gratitude to the Drug Task Force, the USMS Fugitive Task Force, as well as the Apalachee and Jackson CI K9 Tracking Teams for their extensive efforts and safe, but successful execution of this operation.

Sheriff Roberts and his staff are committed to the fight against drugs that plague our community, and would like to encourage anyone with any information about those who traffic, manufacture, abuse, use, sell, and/or deliver any illegal narcotics to contact the Jackson County Sheriff’s Office at 850-482-9624 or Chipola Crime Stoppers at 850-526-5000 or toll free at 888-804-8494. Tips can also be submitted online at www.crimestoppersofjacksoncountyfl.com