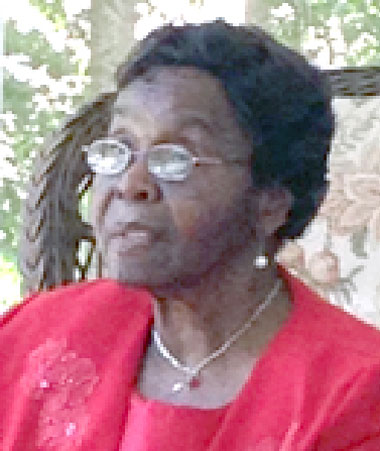 Irene Bell Hadley (Madea), 87, of Marianna, Florida passed away Thursday, August 8, 2019. She was born on August 15, 1931 to the late Robert and Leasie Bell. Irene was educated in the Jackson County School system. She accepted Christ as her Savior at an early age. She attended Mack Chapel AME Church in Marianna, Florida, Springfield AME Church in Gretna, Florida and Friendship AME Church in Chattahoochee, Florida. Irene was a strong, kind and loving women. Every time you saw her, she had a smile on her face or either say something to make you laugh. Irene was preceded in death by her mother: Leasie Bell; father: Robert Bell; husband: Roosevelt Hadley, Sr.; daughter: Dorothy Baker; sons: Charles Bouie, Sam Baker and Curtis Baker. Irene leaves to cherish her precious memories a loving and devoted sister: Laura Collins; her children: James Bouie, John Bouie (Jody), Horace Jenkins (Mary), Leroy Hadley (Clara), Mattie Hadley, Roosevelt Hadley, Jr., Linda Hadley, Tyrone Hadley, LaKeishia Horne (Tony), Stephanie Hadley (Tanorris), and Stanley McKinsey (Kim); forty grandchildren; great grandchildren; and a host of nieces, nephews, cousins and friends. Irene you will never be forgotten and will truly be missed by all that knew you. We love you forever. Crawford & Moultry Funeral Home of Chattahoochee were in charge of arrangements.