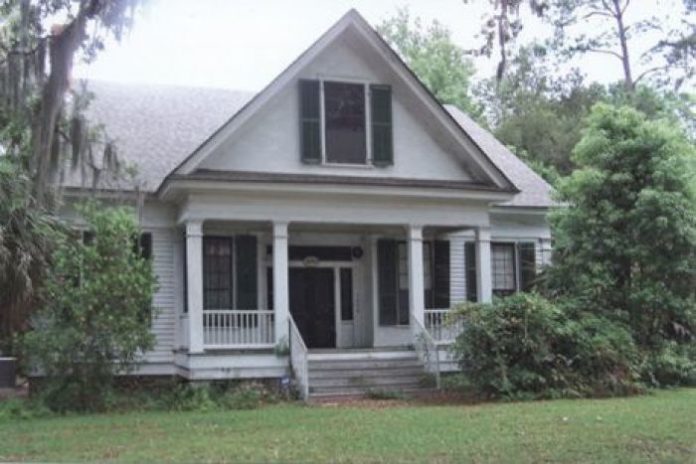 Our publisher thinks the series I did on antebellum Greenwood was well received. He has asked me to do one on the Davis-West House. We will start with two pictures of one of the earliest occupants, Dr. Theophilus West.

The house is located at Putnam and Madison Sts in Marianna. It was built in the 1840’s by John Davis for his daughter Rebecca. We will discuss the structure later.

Dr. West’s parents, Charles Burdick West and Zipporah Topping came to Jackson County from Virginia in 1827, just five years after the county was established. At that time the county extended from the Suwannee River to the Choctawhatchee. The Wests family established their plantation north of Tallahassee. Theophilus was born there September 5, 1836. He was educated in the common schools of that day and became a teacher at age 20. He graduated from Oglethorpe Medical College in Savannah, GA. in 1859 and soon moved to Marianna where he started his medical practice. In 1861 he married Rebecca Davis Spears, a widow for whom the house was built.

Since the war began that year he became the surgeon for Company E, Eighth Florida Infantry, Confederate States Army which was assigned to the army of Northern Virginia. This was Robert E. Lee’s army and he served with it until the surrender at Appomattox. The Chipola Historical Trust has his parole which was issued April 10, 1865. It is shown here.

After returning to his farm he resumed his medical practice and was very active in community affairs. He was noted for his attention to patients regardless of their heritage even though they had not the ability to pay him. The war had impoverished almost everyone.

About 1872 he moved into town and established his first drug store. In 1877 he was appointed to the county school board by Governor Drew. He served as chairman continuously for about 15 years. In 1906 he was elected by large majority to the state senate. He was elected Speaker pro tem in 1907. He was chairman of the Committee of Health. He was a member of the Methodist Church and served as superintendent of Sunday school for more than 30 years. He was a noted student of the Bible and was considered an authority on its teachings.

He was noted as an entertaining and enlightening public speaker. He occasionally submitted writings to the local paper and they were read with great interest.

Much of this information was gotten from the Florida State archives. In conclusion, I am including the last paragraph from which it was taken.

“His first wife died in January, 1901. She bore to him one son Theodore D. West, now a prominent business man of Philadelphia, Pa. His second wife was Annie Slade of Columbus, Ga., daughter of Captain J.J. and Lela Slade, to whom he was married in June, 1902. They have two little sons living, Charles Slade, age four years, and Marion H., age two years.”