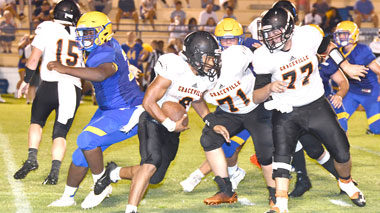 The Graceville Tigers were looking for an improved year this year. To accomplish this feat, they bought in to what new head coach Barry Gardner said, worked hard, and took those lessons to every game. Two pre-season games and now two regular season games, the Tigers are 4-0. Their latest win may have been the sweetest one yet, a 6-0 shut out of the Chipley Tigers last Friday night.
Jeremiah Castro didn’t waste a lot of time before he had his team on the board following a 72-yard run into the endzone. The Tigers were up 6-0 and that score would hold for the victory.
Aeneas Myrick had a nice run into the endzone but a holding IN the endzone had it called back. Jeremiah Castro had another long run for a would-be touchdown but stepped out of bounds prior to landing in the endzone.
On the night, Castro had 16 carries for 145 yards.
Gardner praised his defense for their performance Friday night, “Charlie Nichols played good on defense. Daquayvious Sorey had a great pick that saved them moving into scoring position. Austin Angerbrandt and Kyrease Watford both had a good game, both had a really good game. Really, our whole D-line played well. Our four defensive linemen were Austin Angerbrandt, Kyrease Watford, Nick Deon and Jarell Carpenter did well for us last night. All four D-linemen played really well last night.”
After a week off this Friday night, the Tigers will host the Holmes County Blue Devils. Kickoff is scheduled for 7:00 p.m.