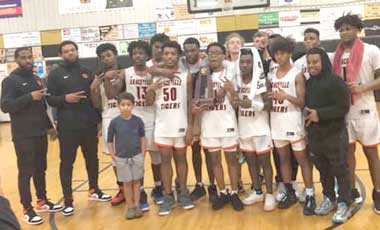 The Graceville Tigers basketball are the 2020 district champions, making it two years in a row. Coach Cameron Dozier has not only won back-to-back district championships, he has developed a group of young boys into fine young men. They won 79-64 over Holmes County Saturday night and will now host Jay Thursday night. They are eagerly anticipating a standing room crowd only when the Tigers take the court at 7 p.m.
Graceville made a statement early, scoring 23 points behind the shooting of Dequayvious ‘Q’ Sorey with nine points, followed by Aeneas Myrick with a pair of threes. The Tiger defense held Holmes County to just 12 points. Holmes County edged by Graceville 18-16 but Graceville was still in control 39-20 at the halfway mark. Joell Green led the Tigers with eight points while Dyron Porter and ‘Q’ Sorey had four points each.
Graceville took control 21-16 in the third quarter behind Christian Lane and Xavier Sorey with six points each. Sorey used the paint to garnish three baskets while Lane took his two shots from downtown. The final quarter was a close one but Graceville held on to a 19-18 edge. ‘Q’ Sorey and Xavian Sorey led the Tigers with six points each with ‘Q’ going 4-for-4 from the line.
Leading Graceville on the night was ‘Q’ Sorey with 23 points, followed closely by Xavian Sorey with 21 points. In double digits with 15 points was Christian Lane, followed by Joell Green with 12 points.
The win sends the Tigers to semi regionals where they will have their sights set on upending the Jay Royals. Jay has been up and down this year, averaging 57 points a game. Their high scoring game was against Pensacola Christian Academy where they posted 77 points. They are coming off a 55-32 loss to Paxton in the district championship game. Graceville will spend this week reviewing film and hitting the court to prepare for the Thursday night matchup.