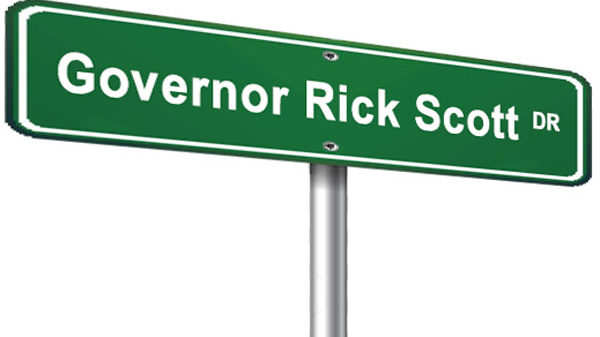 Tuesday night at the Jackson County School Board meeting, the board was advised by Pam Pichard, Long Term Recovery Director that there was a need to name another road at the Endeavor property in order to continue planning and addressing the properties there. She advised that the Board had chosen Endeavor Boulevard for the road at the main entrance to the property.
Pichard said that staff was recommending the Board consider names that are similar to the word ‘endeavor’ be chosen to maintain a positive theme. She advised that the staff had come up with the name Venture Parkway. Pichard added, “The sheriff has had some discussion and has come up with the name of Governor Rick Scott because he was instrumental in helping the sheriff obtain the current building for the sheriff’s office.”
Commissioner Jim Peacock made a motion to name the street, Governor Rick Scott Parkway. Peacock said, “This is in view of fact that Governor Scott gave us the property.” Commissioner Eric Hill seconded the motion.
Discussion was held about whether to retain the title ‘Governor’ at which time Pichard said it was protocol to retain the title for which it was named. Sheriff Lou Roberts suggested Governor Rick Scott Drive rather than parkway with Peacock amending the motion to reflect said change.
The motion passed 3-2 with commissioners Chuck Lockey and Willie Spires not voting in favor of the motion.
Commissioner Eric Hill said in an interview following the meeting that he felt Senator Scott was an excellent choice, “He gave us the property and did an awesome job for Florida while he was governor. His diversity in choosing his appointees is apparent. Jennifer Carroll was his first lieutenant governor. He then appointed Carlos Lopez-Cantera to finish out her term when she resigned. While serving as governor, he learned Spanish and was a huge supporter and still is of the Puerto Rican people after the hurricane. He made numerous Hispanic appointments to the judiciary, one to the Supreme Court. I think this is definitely something he should be honored with.”
Commissioner Jim Peacock seconded those sentiments, “Governor Scott was in the middle of a senate race at the time Hurricane Michael hit the panhandle. He could have very easily been down stated in some of the more populous areas following Hurricane Michael but instead, he made trip after trip to Jackson County and many, many trips to surrounding counties to check our progress and see what his office could do to help. He not only gave us the Endeavor Property, he also gave money to help with the cleanup.”