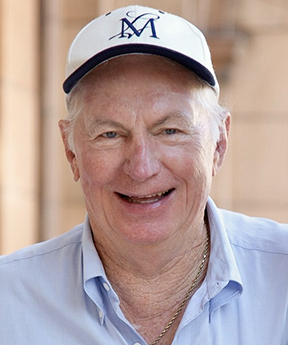 As the patriarch of the Jordan family, he led by example and dreamed up and enforced such family rules as “You can do whatever you want to do, but you can’t stop people from doing what they want to do.”

Bud’s Stuart, Florida community of five decades knew him as an investment manager, a friend, a philanthropist, a parishioner, a golfer, a juggler, a clown, a dancer, and an FSU football fanatic.

Born in Alabama the son of an accountant mother and hardware store owner father, Bud was born into a world mired in depression and world war, giving him the scrappy go-getter attitude and self-made success for which he was renowned.

Bud’s remarkable life experiences empowered him to be a terrific storyteller. One of the stories he most liked to share was about how he and Martin Luther King, Jr. teamed up in the 1950s to make ice cream for the Sunday picnics after church services in Montgomery, Alabama.

With no benefactor or loan to finance his college education, he sold shaved ice treats on street corners in Marianna, Florida to pay his way through Florida State University, where he was a business major and a clown and juggler in the FSU Flying High Circus. He went on to become one of FSU’s biggest supporters as a member of the Golden Chiefs and donor to the FSU business school, where he mentored students and which in 2011 inducted Bud into its hall of fame.

After his college education, Bud moved to Atlanta, where he was a homebuilder and entrepreneur, the inventor and distributor of cleaning products, giving him the money to go to stock brokerage school in New York. Bud and Marjie were married in Atlanta in 1964.

In 1969, Bud and Marjie moved to Florida, where Bud worked as a stockbroker with EF Hutton, Prudential, Legg Mason and Merrill Lynch. He served as the first-ever investment manager in Stuart, where he worked for 50 years before retiring from Merrill Lynch at age 85.

Bud and Marjie were driving forces for good in Stuart, where he co-founded the Economic Council of Martin County, the Martin County Community Foundation and the St. Lucie River Initiative, now the Rivers Coalition. He was the biggest backer of the groundbreaking birthing center Marjie founded and ran in Stuart.

Bud, Marjie and their family treasured their time together both at home and during their travels, including to the former Soviet Union, central and western Europe, China, Cuba, the Middle East and beyond.

Vibrant and fun-loving until the end, Bud and Marjie dazzled as the king and queen of the dance floor at their granddaughter Zoe’s late October wedding.

In lieu of flowers, the family asks that donations be made to the Community Foundation of Martin-St. Lucie, the First United Methodist Church of Stuart general fund or the church’s Cuba Sister Church Fund.