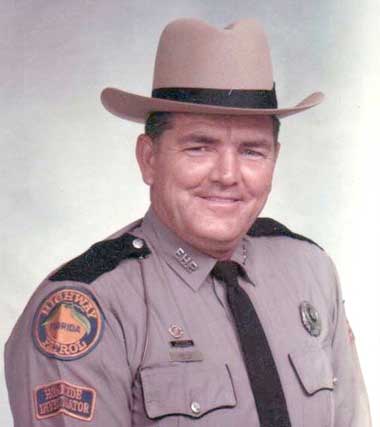 Law enforcement officers are never certain when they leave their homes for a shift if they will return or not. That’s a given – we hear it all the time. Along with that, we hear the jokes about them being at a donut shop or a coffee shop. It goes hand in hand and the majority of them accept the joking as a part of life and the job. Businessmen, secretaries, teachers, doctors, lawyers and Indian chiefs all eat too, but it’s the LEOs who take the most ribbing about it.
Trooper Wilburn A. Kelly never thought for a moment when he left his home in St. Augustine on Saturday, March 23, 1974 that he would have seen his wife and daughter for the last time. His daughter was 23 years old and every bit a daddy’s girl as the day she was born.
Trooper Kelly was on patrol and answered a call to report to an automobile accident where he was then struck from behind and killed. Trooper Kelly had served with the Florida Highway Patrol for 22 years at that time.
He left behind a wife and daughter, Cynthia (Cindy) Kelly Schuster. Cindy was recently notified that in memory of her father, a portion of I-95 (between mile markers 332 and 327) in St. Johns County is designated as the “Trooper Wilburn A. Kelly Memorial Highway.” The official presentation will take place January 24, 2020 at 1 p.m. at the St. Augustine Station.
Over 40 years have passed and thoughts and remembrances continue to be left for Kelly, “I remember you as both a fine person, loving Father and honest officer. You were always fair and kind to me and my deep respect for you has not been diminished in the least by time (oh so many years). Your love for your family and your devotion to your community is a great and beautiful legacy that I will admire until my days are done. Thank you, Buddy, I think of you quite often and may God bless your soul and keep you close to him, always. Citizen – Bruce M. Cohoon, Personal Friend and Admirer, December 31, 2015”
“Another year has passed and you are still admired and respectfully remembered in the hearts and minds of so many. My thoughts and prayers are with your loved ones and friends on this anniversary of your EOW. You will never be forgotten. James Sheppard, Father of Sgt. Jason L. Sheppard EOW 12/7/06, March 23, 2010.”
Kelly had ties to Marianna and Jackson County. His daughter began school here at Riverside Elementary before Kelly was transferred in 1962 to St. Augustine. Cindy Kelly Schuster has remained in contact with numerous classmates since leaving Jackson County and returns frequently for visits.