The Jackson County Times published a story last week on the late FHP Trooper Wilburn A. Kelly. Sneads resident Jimmy Alday saw the article and immediately thought back to when he was 19 years old and a student at Chipola College.
Alday paid a visit to the TIMES office this week to tell us of his experience in 1963 with Trooper Kelly, “Call it coincidence or fate: the same day I bought a Jackson County Times Newspaper, I was in my office looking at some old papers, when low and behold there was the ticket of my first moving violation issued by W. A. Kelly, whose picture was on the front page.”
Alday said it brought back memories of his first year at Chipola, “I was living in Chattahoochee and car pooling to Chipola. There were six of us in the carpool. Our parents had freed up the six-passenger sedan so we could commute to Chipola, not one student had his own car. Each of drove a total of three weeks per semester. The rules of our carpool were no class after 2:15 or you were on your own. I took 17 hours each semester.”
Alday relates the day he was stopped by Kelly, “While driving back home one afternoon, I was behind a slow car going up the hill by Schultz Farm. I used two car lengths of the yellow line to pass it. There by Lawrence Road, suddenly I saw the blinking lights. It was Trooper Kelly who saw me and immediately reacted with lights. He proceeded to give me a ticket as well as a lecture that set me on a lifetime of obeying the law.”
Alday told us of his experience paying the ticket, “To further my education, I went to pay the fine at the Jackson County Court House. Julian Laramore was the judge and he talked to me. I’m ready to give my check for the fine but he told me he did not take checks. He said he was supposed to lock me up if I couldn’t pay the fine. However, he told me that if I could go to the bank and cash my check and be back in 15 minutes, he would accept it. Needless to say, I complied.”
Alday said that ticket and Kelly’s advice kept him on the straight and narrow throughout his adult life, “As a tribute to Trooper Kelly, I’ve only had two speeding ticket in his lifetime.”
Alday owned and operated Sneads Pharmacy from 1973 to 2012. He graduated from Chipola in 1964 and from the University of Florida in 1967. He met his wife, Marie Alday 50 years ago. She was an educator at Sneads Elementary, principal at Chattahoochee Elementary and retired from Florida State Hospital Education Department. 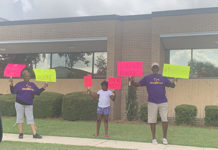 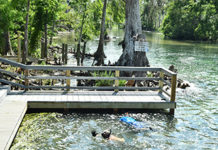 The Jackson County Parks and Recreation Department is delighted to offer an update for Spring Creek Park.