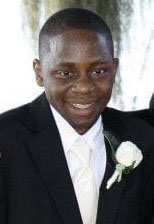 Eugene Jackson Jr. 39, received the gift of life on March 10, 1982 to the Eugene Sr. and Loretta Broxton Jackson in Panama City, Florida.

He accepted Christ into his life at an early age. He was a faithful member of Carter Temple First Born Church for 30 years. He loved Sunday school, and serving the Boys to Men Ministry and Media Ministry. He was also a member of Second Chance of Northwest Florida where he enjoyed the TBI Community.

Being raised in Panama City, Eugene attended the public schools of Bay County. Upon graduating from high school, he furthered his education at Gulf Coast, aspiring to become an educator. His desire to learn led him to teach himself Spanish to better assist himself as well as others, especially his customers while working at Burger King, Radio Shack, Home Depot and Sprint. He used his gifts to easily learn by mentoring and tutoring young men in math.

In 2008, Eugene sustained a traumatic brain injury as a result of a car accident. Through the years he remained resilient. In his leisure, he enjoyed watching wrestling and marvel movies. After attending a diabetic youth camps at Shands Hospital in Gainesville, from there he became a lifelong UF Gator fan.

On Friday, October 1, 2021 Eugene entered peacefully into the arms of his Lord and Savior. He was preceded in death by his paternal grandmother, Nellie Pittman; a dear great aunt, Christira Blocker; and his therapy dog, “Nike”.