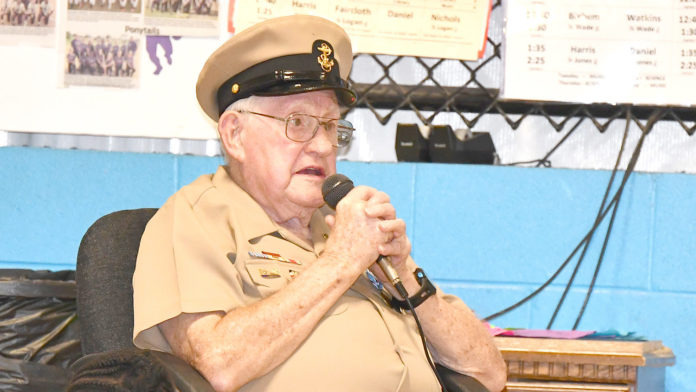 Ernie Andrus is a World War II veteran who enjoys life to the fullest, and it appears he always has.  Andrus made a cross-country trip from San Diego to St. Simon’s Island three years ago, starting when he was 90 years old finishing when he was 93.  Andrus said two years off was enough for him so he’s reversing his trip and heading to San Diego. He said, “I got bored. I had two years of just running in the neighborhood so I decided I’d get back to the highway where I’m really having fun.” His plans are to reach his destination by his 100th birthday.

His mission for the trip is to bring the LST 325 to Normandy. Many years later, he’s hoping his running journey will help raise money to honor a Landing Ship Tank, the LST 325. Andrus said, “This particular ship was at Normandy on D-Day. I’d like to take it back over for a memorial service.” This ship is said to be the ‘ship that won the war’ and Andrus says he just wants it to be preserved.

With all of his running, ironically, the highway is where Andrus decided to join the armed forces, “I was cruising the streets of Los Angeles in my Model A Roadster with a buddy of mine, trying to pick up chicks and I had this little portable radio set up in the back of me and it said ‘Pearl Harbor had just been bombed.’ And I said to my buddy, ‘where is Pearl Harbor?’ He says, ‘I don’t know but I think we’re at war. Let’s go join the Navy!’”

It wasn’t a one-two punch for Andrus getting into the Navy, “I got in as soon as they’d take me. They turned me down, because I have a lazy left eye.” When Los Angeles turned him down, Andrus went to Wilmington and they also turned him down. Andrus said on his sixth try the line was so long that he was able to memorize the eye chart and that’s how he got in. Andrus’ job was with the Hospital Core. He says, “My job was to keep those Marines alive. I was very fortunate. The Lord was looking after me cause I never lost a patient.” Andrus served the United States of America for a little less than four years, getting out of the Navy six months after Pearl Harbor ended.

This trip is a little different for Andrus in that he is not running solo.  John Martin, a retired firefighter, heard of Andrus’ first run and actually joined him a couple of times, including the finish in St. Simon’s Island.  Andrus is quick to say he is grateful to have Martin along, “There are some things that I would be afraid to try now by myself.” Andrus said that Martin hooks and unhooks the car from the motor home.”

He’s had an eventful time since arriving in the panhandle of Florida with a birthday party topping off his Monday run as he turned 96 years old. Blondie’s in Grand Ridge was full of family, fellow veterans, well-wishers and Congressman Neal Dunn in celebration of the veteran’s 96th birthday.

Congressman Neal Dunn was pleased to be a part of the celebration of such a fine veteran, “They say you’re not making any more World War II veterans and they really are the greatest generation. It’s just fun to sit and talk to them and hear them tell their stories.”  Congressman Dunn presented Andrus with an American flag and a certificate during the party. Neal added that just being around a veteran of Andrus’ kind was special.

Andrus spoke of another memorable welcome he had in Jasper, Texas. He said, “They had me finish at the parking lot at Wal Mart. The Wal Mart manager, she came out and ran with me, they had the fire department with the flags flying up high and they had a band out playing. All of the officials were there, they had a grandstand set up for me. About two hours of speeches, so that was really neat.”

When Andrus got out of the Navy, he said the first thing he did was go to UCLA on the GI Bill. After that he started raising a family and had to have a good income. Andrus went to work for Thrifty Drugs Stores that was the fastest growing drug store chain at the time. Andrus said, “So, they had a contract with the government for an on-the-job training program for managers. I went to what we called ‘Thrifty College.’” Andrus said he would go to downtown Los Angeles one day a week for some lessons and then he would go and put in 12-14 hours of work at the drug stores. Andrus realized that they couldn’t build as many stores as they could train managers so when he tried to resign, they reassigned him to the pricing department. Andrus said that he really liked that and did that for about four years. Andrus eventually switched to grocery stores; he said the reason for the switch was because the pay was better. Andrus said, “I was managing grocery stores when I retired in 1984.”

Andrus says there was a purpose of when he started his first run, “I did that on purpose, because I was retired.” Andrus is also featured in a History Channel documentary that you can find on YouTube called, ‘The Return of LST 325’, with Andrus saying, “It tells about us bringing that ship back, which is something that was said would be impossible.”  He jokes about why he started from where he did, “I picked Mission Beach in San Diego because it was least sand to run across.”

Andrus and his running companion, Martin sleep in a motor home at night and his car is also towed when he’s traveling. He uses his car to get to all the runs and to also go to the grocery store. Andrus said that he can run a minimum of three miles in a day or a maximum of 10 miles. He said he never thought about running across the United States until a gentleman from Great Britain was running across every country.

Andrus also likes give presentations at schools. He really enjoys talking with fifth graders because as he says, “They’re at the age of making decisions that might last the rest of their lives. They’ve got good questions, they’re interested, they want to know.” This past Friday, Andrus talked with the fifth-grade classes at Riverside Elementary School .