Elsie Mae Duce Moline of Marianna died at home on April 15 of lung cancer.
She was born on Oct. 16, 1932, at the home of her maternal grandparents, Tony B. and Lula Allen Horne, in the Two Egg community to Ephadus Edward (Bill) Duce and Mary Emma Horne Duce. Her paternal grandparents were John E. and Sarah Alice Guy Duce.
On Sept. 30, 1954, she married Robert Arthur Moline Jr. in Queens, N.Y.
She was the mother of three sons: Robert Jr. and Mark (both deceased) and Michael. She was grandmother to Matthew, Katherine, and Robert III (deceased).
Her siblings were Ruth Duce King and Gayle and Donnie Duce (both brothers deceased).
She was a graduate of Central School in Malone; Malone High School; the Florida State Hospital School of Nursing in Chattahoochee; the Brisbane, Australia, College of Nursing; and Florida A&M University.
As a registered nurse, she was licensed and worked in Florida, New York, North Carolina, Missouri, Mississippi, and Queensland, Australia.
No public services are planned at this time. 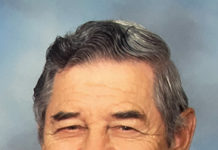