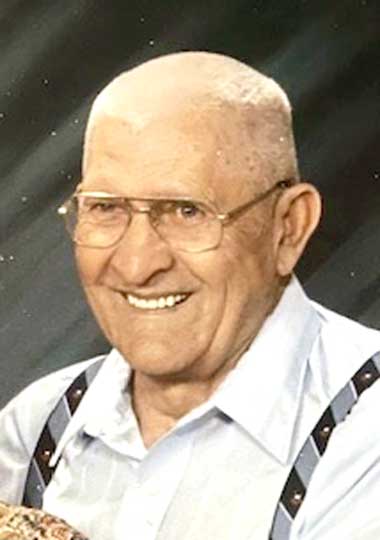 Edwin Eric Petz age 89 of Cottondale, passed away on Wednesday, February 26, 2020.
Edwin was born on July 22, 1930 to Henry Petz and Laura Bartel in Shell Lake, Wisconsin. He joined in marriage with Daisy Alice Moyer on February 27, 1954 and together they had six children. Jean (Mike) Neubauer of Medford, Wisconsin, Eric (Sue) Petz of Wilmot, Ohio, Henry (Jean) Petz of Spring Hill, Florida, Steven (Missy) Petz of Zephyrhills, Florida, Denise (Rich) Gray of Marianna, Florida and Daisy (Stephen) Petz-Phillips of Cottondale, Florida. Edwin was a proud grandfather of thirteen grandchildren, and five great grandchildren.
He was preceded in death by his wife Daisy in 2012 and his son Steven in 2017.
May he rejoice and rest in peace.
Private family graveside services for Edwin will be held at Floral Memory Gardens Cemetery in Dade City, Florida.
Marianna Chapel Funeral Home are in charge of arrangements.
Expressions of sympathy may be submitted online at www.mariannchapelfh.com.