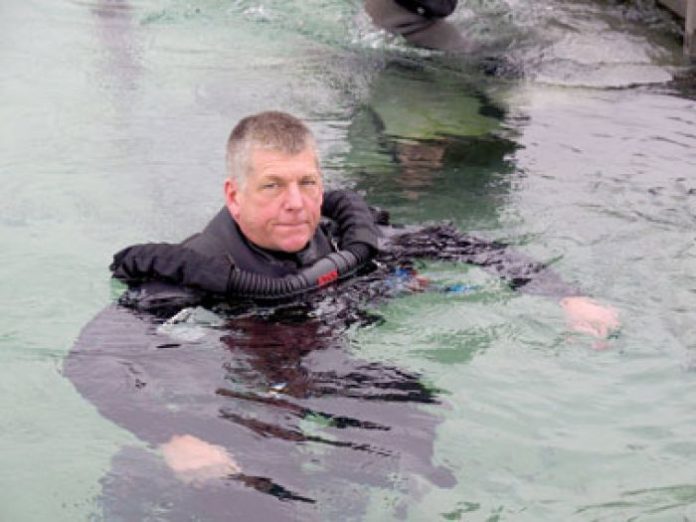 Middle of the night phone calls are not an everyday occurrence for Marianna’s Edd Sorenson but they are not uncommon. When he was called Wednesday morning (4/17/19) at 2:00 a.m., he pretty much knew he would be in route to another rescue before daylight. His expertise in diving was needed in Tennessee where Josh Bratchley was trapped in a full water-filled cave.

Bratchley had failed to exit the cave he and four others were exploring, according to the Jackson County (Tennessee) Emergency Management Agency.  The divers dove into the cave in Gainesboro, just north of Cookeville but noticed upon exiting that Bratchley was missing. Bratchley was a very experienced diver, having been a part of the rescue team involved in saving the Thai soccer team last year. This time it was Bratchley who needed to be rescued.

That’s when the call came for Sorenson. In an interview with Sorenson Friday morning, he said, “Their experts did seven or eight dives looking for him over the course of seven to 10 hours, something like that. Finally, they called 911 and when 911 got all of the information, they said, ‘We need to call Edd’. I was called about two in the morning.”

Sorenson drove to Tallahassee to take a flight that connected to a flight in Atlanta, leaving his home within an hour of receiving the call.  From Atlanta, he flew to Nashville where he had arranged for a fellow cave diver to meet him at the airport in Nashville to drive him to the cave sight and do surface support for him. Upon arriving at the airport, Sorensen said, “When I was waiting for my connecting in Atlanta, Bryan from the Hamilton County Rescue called me and said that time was of the essence and they were going to have THP fly me over in a helicopter standing by. We got all my gear out of baggage claim. They drove me two blocks to the THP hanger where the helicopter was waiting. They flew me right to the sight, landed in a little field right next to the cave.”

About the chain of events once Sorenson arrived at the sight, he said, “There was first a pre-dive briefing in the mobile command center they had set up where I looked at the map, talked to the rescue divers who were on scene who were his dive partners, what they had done, what they encountered, what I would possibly encounter. Then I had to put my rebreather together, gear up all my tanks and set up everything which took a little less than an hour. Then they asked since my partner was coming in from Arkansas and was about an hour behind, would you mind going in by yourself. I told them no and that’s when I went in and I think my total dive time was just under 50 minutes.”

We asked Sorenson if there had ever been a time that he had any fear of not coming out of cave rescue alive. Sorensen said, “I don’t really know how to answer that. When you’re going into a situation like this, there’s always the fear of if he is panic stricken, a panic diver can kill me too. If he’s okay when we go in the water and then panics, because usually when you take a diver out of an extremely stressful situation and he gets to a safe spot like Josh did and you take him back into that horrible situation, they can snap in a blink of an eye and kill you. So that thought crosses my mind. I’ve been doing this for 22 years so I’m pretty experienced in what can go wrong and so it’s there in the back of my mind, whatever it takes to make this not happen.  My grandpa had a thing, what’s the best way to deal with a problem – don’t have it. So, that’s the way I was brought up from an early age. My dad always told me from an early age that you are always to help your fellow man if at all possible. So, all I can do is think about what can possibly go wrong and how do we prevent that from happening. That’s why when I was getting him out, I gave him a play by play of what we were going to encounter. And normally, every time it wraps around a rock to change direction, a cave diver would feel around that rock to find where the line comes out on the other side. I wanted to take all the thinking out of it. So, I told him, each time we get to a tie off, I’m going to physically take your hand and put it on the line that I want you to go on. I took all the thinking, all the stress precursors out of it so that he just had a nice smooth ride out and it went quite well.”

After spending the night, Sorenson was back in Jackson County, Florida Friday with business as usual.