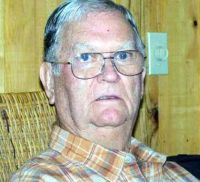 He was born on April 30, 1930 in Marianna, Florida. The youngest child of James Monroe and Mittie O’Dessie (Ross) Robinson, Doyle grew up on a farm in Bascom where he lived until he enlisted in the U.S. Army and was sent to Korea. On June 13, 1956 Doyle married Frances Merle Olive, the love of his life, in Bascom, Florida. Doyle raised hogs and grew peanuts, corn and soybeans until selling his farm in 1982 to pay off medical bills following Frances losing her battle with breast cancer. Doyle then went to work for the Jackson County Health Department testing water wells until 1989. He then worked as a security guard for the paper mill in Donalsonville, Georgia for several years. Doyle continued to farm around Bascom and Malone for relatives and friends until his health prevented him from doing so and he retired in 2010. For many years, Doyle was a regular at Bryan’s Store in Bascom where he spent hours visiting and drinking coffee.

He was preceded in death by his wife, his daughter, Catherine Frances Wasley, a granddaughter, Frances Pheigh “Frani” Robinson and all of his siblings.

Doyle will be remembered for his kindness, his love of a home-cooked meal and a good fish fry.

His family would like to extend a special ‘thank you’ to Ben Floyd and countless others who have helped Doyle over the years when he was no longer able to cook or drive. He remained independent living on his own terms a few short miles from where he grew up.

A memorial service to allow friends and family to pay their respects will be 11 a.m. to 2 p.m. CST, Saturday, April 6, 2019 at Mount Olive Baptist Church in Bascom, FL. A pot luck dinner will be served at noon. James & Sikes Funeral Home Maddox Chapel is in charge of arrangements.