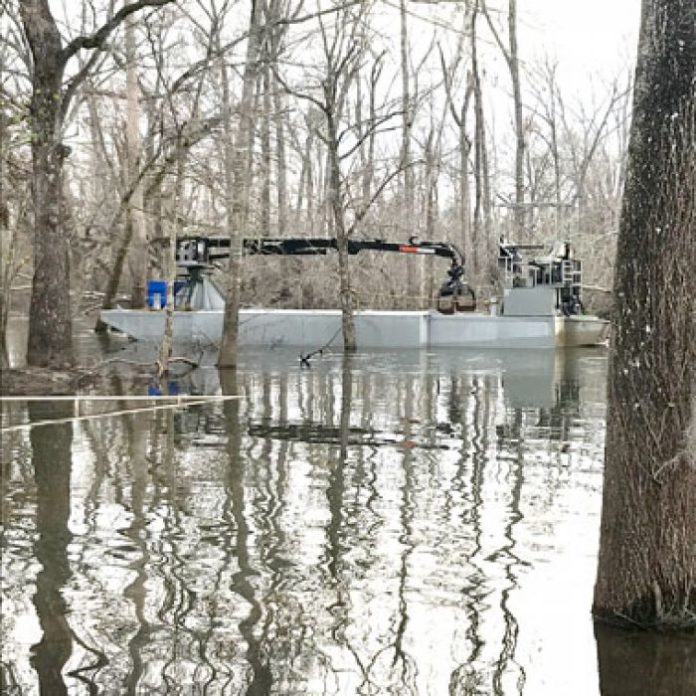 Passer-byers on the Caverns Road Tuesday morning, your curiosity was peaked when you saw a couple of very large barges, one equipped with a grapple on the Chipola River at Yancey Bridge. We talked with Parks and Recreation Director, Rhett Daniels about the reason for the barges.

Daniels said the county had a couple of contractors to remove debris from the Chipola River left from Hurricane Michael. Daniels said, “There are two phases involved with this. First, as you can tell, the river is kind of high so they’ll be getting what they can now and then they’ll be making another pass when the river is down to try and get everything.”

Daniels said one issue they are facing is establishing hurricane debris and long-lasting debris, “If it was there pre-storm, they are instructed not to remove it based on DEP and US Fish and Wildlife guidelines. Daniels said a lot of that will be determined by the monitoring company that is a third-party contractor but overall, they will be able to remove several yards of debris. Daniels says in talking with one of the project managers, “They anticipate this will take several months depending on the extent of what they are allowed to remove.  There are several state agencies and federal agencies working on this project as far as guidelines as what can be done. If Northwest Florida Management District were to allow them to work out into the flood plane to remove debris with the water high, that will obviously consist of a lot more debris to be taken out of the waterway.”

Daniels said for the most part they are starting at Yancey Bridge and going to Johnny Boy’s which is outside Jackson County but is still in Calhoun and going all the way out to Wewa. Daniels said a factor that complicated the river was the sever amount of rainfall they had after the hurricane, coupled with all the downed debris has restricted the river flow. That has allowed the river to back up into properties where you typically wouldn’t see any flooding. This has increased the duration of the flooding that Jackson County has seen.

Daniels reiterated that there were several departments involved, DEP, US Wildlife, Northwest Water District are the primary ones involved. Daniels said he was very grateful for it getting started this soon, “It was actually a lot sooner than I anticipated so hopefully by summertime, it won’t be completely cleared but hopefully we will have that additional economic boost that we need right now with people coming to utilize our rivers.”

Daniels said there are approximately 74 miles of river, including all the way up to Christoff Fairy, which is the northern most access where you can put in a boat.