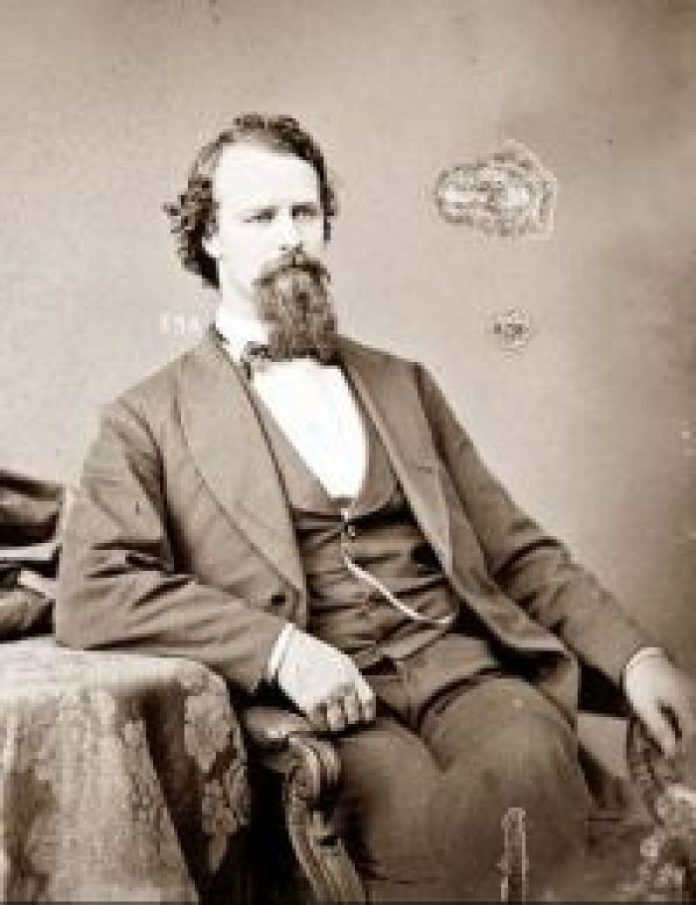 And I looked, and behold a pale horse: and his name that sat on him was Death, and Hell followed with him. And power was given unto them over the fourth part of the earth, to kill with sword, and with hunger, and with death, and with the beasts of the earth. – Revelation 6:8.

The Reconstruction era in Jackson County took an ominous turn early in 1866 when a Union officer named Charles M. Hamilton arrived in Marianna. To quote the verse from the Book of Revelation, “Hell followed with him.”

Hamilton came to Marianna to head up the local office of the Bureau of Freedmen, Refugees and Abandoned Lands (commonly called the Freedman’s Bureau). This was the organization tasked by the U.S. Government with overseeing the transition of the former slaves into their new roles as citizens of the country. In most areas of the South, the Bureau’s work went without violence. In Jackson County, however, that was not the case and Hamilton himself was the cause of much of what followed.

When he first arrived in Jackson County, Hamilton was surprised to find that the local whites were “pretty well disposed to the freedmen” and that no significant problems were taking place. This was because the people of both races, after hearing from the governor the previous fall, had moved forward with making arrangements to get the county’s farms back into operation.

Governor William Marvin, the appointed military governor of Florida, had addressed public meetings in Marianna on September 16 and 17, 1865, explaining to the freed people what it meant to be free:

…You must be contented with having your freedom, and what else you have you will have to get by work. And when you shall have made it by hard work, you will know how many days of hard toll it cause you to get it, and then you will rightly value it, and take care of it. You now are at liberty to go to work for yourselves; you have none other to work for. You belong now to no man; you have ceased to be property; you never will be sold again; and if you will struggle hard and do right, live as good men and women, and you will prosper, if not, you will suffer.

The governor had urged all of the county’s citizens, both white and black, to cooperate and do what they could to begin producing badly needed food as quickly as possible. And the citizens had responded. Per the governor’s instructions, they entered into hundreds of contracts.

These contracts basically were sharecropping agreements. Few of Jackson County’s landowners had any real money left after the war, so they offered a share of the crop plus housing, food and other supplies to the freedmen in exchange for them helping to return the farms to production. Surviving examples of these contracts show that they were well done and that the landowners tried to be fair.

When Charles Hamilton arrived in early 1866, before even the first post-war crop could be planted, he immediately and illegally invalidated these contracts.

Under Florida law, the labor contracts were under the regulation of the county judge and nothing in either state or federal law gave the Freedman’s Bureau any control over existing agreements. Hamilton, however, overruled the law and assumed responsibility for the contracts himself.

Not only did he require that all agreements be made using a printed form he prepared himself, he also required that both landowners and freedmen pay him fees for stamps to be placed on the documents. It was the first step in an assumption of power by the Bureau that far surpassed anything attempted anywhere else in Florida.

The consolidation of power by Hamilton and the Bureau was the spark that soon led to the first outbreaks of violence in Jackson County. The agent’s arrival in Marianna, reasonably could be called the first “shot” in Jackson County’s Reconstruction War. This was the opinion of John Wallace, himself a freedman, who had served in the Second U.S. Colored Troops and fought on the Union side at the Battle of Natural Bridge during the Civil War. He went on to become a teacher and legislator in Florida after the war and summed up his opinion of the cause of the violence in Jackson County as follows:

…The two races became arrayed against each other in deadly hostility, which led to frequent occurrences of violence and bloodshed. This state of things was not due to the enmity of the whites to the blacks, nor their opposition to the new law enfranchising the latter – though they were opposed to it, of course – nor was it due to any natural bad temper or hatred of the whites on the part of the colored people, for under ordinary circumstances there are no more peaceable people in the world than the inhabitants of Jackson County, of both colors, and they would have passed through the ordeal of reconstruction without a jar or disturbance, had it not been for the evil influence of the very men who were delegated to preserve peace, to administer justice, and to promote good fellowship and kindly relations between the freedmen and their former owners.

It did not take long after Hamilton’s arrival for things to begin to change in Jackson County. His arrival, whether on a pale horse or not, had surely brought death with it.

Editor’s Note: Writer and historian Dale Cox is the author of ten books on Southern history. They are available at Chipola River Book & Tea on Lafayette Street in downtown Marianna or online at www.exploresouthernhistory.com.