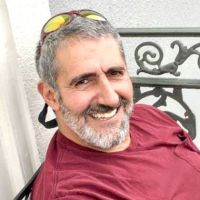 Dave, Badge #0820, began his career with the Hollywood Police Department (HPD), in 1977, as a Community Service Officer (CSO), and then attended the Broward County Police Academy in 1979. Dave worked as a patrolman at the HPD and then transferred to the Police Department’s Vice, Intelligence,and Narcotic’s unit. Dave continued working undercover narcotics and then became the Technical Detective for the police department, where he completed his career.

Dave loved being a Police Officer and enjoyed the many men and women he met and worked with for nearly 30 years. Dave met his wife Cindy, also a Detective at HPD and they married in 1995. Dave and Cindy were inseparable. In April of 2002, he and Cindy retired and traveled to Alaska and back over a seven-month period. After returning from their trip of a lifetime, Dave and Cindy put down roots in Jackson County, FL. He and Cindy started their own private investigation firm (Dave Graziadei Investigations, LLC) in 2007.

Dave loved doing any kind of hobby or activity. Dave was an extremely active man who loved building things around his and Cindy’s farm, traveling, camping, fishing, scuba diving, and riding his Harley Davidson. Dave was very proud to have helped co-found The Marianna Mustang Club with his good friend, Dwight Tillman. Dave was also a recent addition to the Single Action Shooting Society (SASS) where he was known as “Hollywood Dave”—an outlaw!

He was generous and gregarious. He never met a stranger and made friends wherever he went. Dave’s smile warmed and brightened all those around him.

Dave was preceded in death by his father, Frank Michael Graziadei. He is survived by his loving wife, Cynthia Bradley-Graziadei; his son, Nick Graziadei; and his mother, Mary Ann Graziadei. Dave also leaves behind beloved family members via his marriage to Cindy: his mother- and father-in-law, Sylvia and John Bradley; his sister in-law, Edith Bradley; his brother-in-law, John Clinton Bradley (Michael); and all of Cindy’s aunts, uncles, and numerous cousins.

Dave had many friends from all walks of life—especially his brothers and sisters of the Hollywood Police Department and his new-found friends of the Panhandle Cattle Company, Redhill’s Rangers, and all those he met through cowboy action shooting, as well as the members of the Marianna Mustang Club.

The family will receive friends from 1 p.m. CST until the time of the service at James & Sikes Funeral Home Maddox Chapel.

Flowers are appreciated but, in lieu of flowers, donations may be made in his memory to https://leo-only.org/.