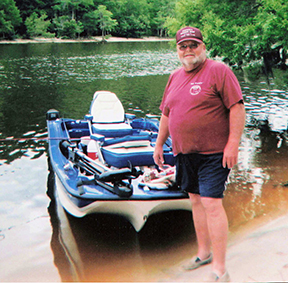 David Earl Rabon traveled many highways in his life and on Friday, January 20, 2023, his final journey ended. He was born April 16, 1953, to Edward and Iris Rabon in Grand Ridge, FL. On December 30, 1971, David married his high school sweetheart Olga Hudson. David traveled around the US with Olga in tow as he strung telephone lines in nearly every neighborhood along the way. From climbing poles, to wiggling down manholes, and rambling along all those long highways. In 1988 David Earl determined it was time to settle down. He moved back to Sneads, FL, and started his career as a correctional officer. From correctional officer at Apalachee Correctional Institution in 1989 to 1993 he moved to Jackson Correctional Institution where he was a sergeant from 1993 to 2012.

Work wasn’t all he did. David Earl also enjoyed fishing, cooking, working on cars, and spending time with good friends. David Earl, lovingly known as “Big Daddy” was loved by many, and his larger-than-life personality was always guaranteed to keep everyone around him on their toes.

David is preceded in death by his parents and his beloved brother Charles Edward Rabon.

Funeral Services for David Earl will be held on Monday, January 23, 2023, beginning at 1:00 PM Central Time in the chapel of McAlpin Funeral Home 8261 US-90 Sneads, FL., with Rev. Bill Mayo officiating. Interment will immediately follow the funeral service at Dykes Cemetery in Sneads, FL. Visitation will begin one hour prior to the funeral service.