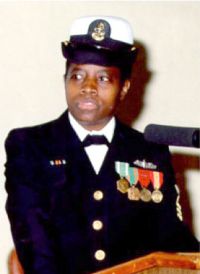 Her Story: Daisy Mae Morgan, a retired Senior Chief Navy Petty Officer, died June 5, 2019. She joined the Navy in 1971 after earning her high school diploma. “I noticed the uniform that a Navy recruiter was wearing and saw a sign that said, “See the world,” and I was sold,” she said in an interview February 28, 2018 with Washington AFRO American newspaper. This marked the beginning of a military career that included 20 years of active duty and another 18 years as a Naval JROTC instructor.

“I joined the Navy to see the world, but I never thought that I would make history and my picture would be on the wall at the Pentagon,” she said. The Afro, Al, A,4. Daisy spent the first eight years assigned to an anti-submarine squadron where she had administrative duties.

“In those days women were prohibited from combat duty so by law we had desk jobs,” said Daisy who volunteered for extra duty by flying with crews on the Navy’s cargo planes. She got sick while in the Navy with Hodgkin’s Lymphoma and she could have gotten out. Nonetheless, she decided to remain and to re-enlist after eight years in uniform. “I had two choices,” she said. “They said I could push boots [work at the boot camp] or go to an aircraft carrier because women were just being accepted.”

Daisy decided to re-enlist, becoming the first African American female ever to serve aboard an aircraft carrier, the USS Lexington, the Navy’s last carrier that had a wooden deck.

In July of 1980, Daisy arrived at the pier of the Pensacola, FI Naval Air Station and gazed at her new floating home. She was one of about 50 women to go aboard a carrier that trained thousands of naval officers how to land on ship, which was critical to the Navy’s war effort in Vietnam and the Pacific.

“I saw a large grey vessel moored with a lot of male sailors engaged in busy work,” she said. “I was met with resistance coming aboard for the first time…being grilled on the ships terms and procedures while bystanders made negative comments and gestures,” she said. Despite being in an “all man’s world” she was uniquely trained for the moment.

“I grew up with 12 brothers and five sisters and we all had the same parents who were God fearing and didn’t play,”. “My mother, Annie Morgan, was a wonderful role model as a mother and a teacher and my dad, Walter Morgan, was hard working father and provider,” Morgan said.

“My father served as a cook in WWII and he was stationed at the Army Air Corp base in Waco, Texas where my mother was from.”

She said growing up in the north rural Florida town of Marianna, Florida, about two hours east of Pensacola, was not easy.

“We picked peas and cotton, milked cows, hoed peanuts and picked blackberries so my mother could bake cobblers,” Daisy said. This prepared her for the toughness required for serving in the armed forces.

During her three years on the Lexington, she was promoted to Petty Officer First Class where she assisted women making the transition from civilian life to working on an aircraft carrier. “Sea duty and ship living isn’t for everyone, but I know God made it all possible. I just had to adjust to sleeping in small barracks…there was no real privacy, constant noise of bells, whistles to awaken us, meal times…. etc.”

Her navy career took her to many parts of the world including London, Italy, and Stuttgart, Germany where she met and married Frank Hadley. They had two sons, James and David. After her active duty career, she became an ROTC instructor at Northwestern High School in Hyattsville, and she remained from 1993 until 2011. Much of that time she taught young people how to wear the uniform, drill, military history and other ceremonial duties. There were also many field trips back to the ships and the Pentagon where a plaque is on the wall with her name.

Daisy received many letters and awards during her military career tenure and many of the letters from high school students who called her “a mother” they could always count on. She worked as a volunteer at the USO supporting traveling soldiers at Thurgood Marshall BWI and Ronald Reagan National Airport. Daisy basked in relaxing at the beach, traveling, working in the Children’s Church Ministry at Mt. Ennon, volunteering at the USO and was one of the Navy Ladies of Arlington. Daisy cherished spending time with her sons, grandchildren, family and friends.

She was preceded in death by her parents, Walter and Annie Morgan, brothers Samuel (Linda) Morgan and Zechariah (Lena) Morgan.

A life so beautifully lived deserves to be beautifully remembered. Please join us as we celebrate the life of Senior Chief Daisy Morgan. Homegoing celebration will be held at Mt. Ennon Baptist Church, Friday June 14, 2019 11:00 am. Repast will immediately follow at the church.