The Graceville Lady Tigers were on cloud nine following Tuesday night’s matchup with Sneads. For the first time for any of the Lady Tigers have been on the team, they handed Sneads an 11-4 loss. Hope McCallister went the distance for Graceville and picked up the win. She gave up four runs, only one of those earned on five hits, three walks and struck out four batters. Kylie Stephens started in the circle for Sneads, went one inning, gave up seven runs, three of those earned on six hits, one walk and struck out one batter. Hannah Stephens came on in relief for four and two-thirds innings, gave up four unearned runs on seven hits, two walks and fanned two batters. Taylor Lamphere closed out the final one-third inning, gave up no runs on one hit and no walks.
Sneads plated two runs in the top of the first inning starting when Elizabeth ‘Sister’ Arnold reached on a Tiger error. Michaela Edenfield doubled to score Arnold before moving to third on a sac by Taylor Lamphere. Kylie Stephens reached on an error, followed by Hannah Stephens singling to put runners on the corners. A flyout to centerfield left two stranded on the bags. Graceville jumped on six runs in their half of the frame starting with a leadoff single by Brianna Adams. Adams moved to third on a single by Adriann Golden. Kaylee Skinner reached on an error that allowed her to reach first safely and two runs to score. Jazmine Bellamy took advantage of a Pirate miscue and reached safely with Skinner scoring on the play. Hope McCallister helped herself out with an RBI single before moving to third on a double by Miah Fountain. Jourdan Wesley sailed one to centerfield to sacrifice a run home. Naomi Daniels singled to score Fountain. Asianna Harvey drew a walk, followed by Adams in her second at bat taking one for the team to load the bases but no additional runs crossed the plate.
A two-out walk to Taylor Reese Howell was the only offense for Sneads in the second inning with Graceville answering with a run. Skinner singled to the left side and moved to second when Bellamy was issued a walk. McDaniel sacrificed the runners to second and third before a single by Fountain plated a run. Wesley drew a walk to load the bases but back-to-back outs left the bags full.
Lamphere singled with one out in the third but was out going to second on a fielder’s choice by Kylie Stephens. Hannah Stephens drew a walk but a groundout ended the inning with no runs crossing the plate. Graceville was kept off the scoreboard in their half of the inning, going three up, three down.
Sneads added a run in the fourth with Aurlee Perkins leading off by taking one for the team. Perkins stole second, moved to third on a bunt down first base line by Jada Coleman. Taylor Reese Howell doubled to score Perkins before Sister Arnold reach on an error to put runners on first and second. Michaela Edenfield sacrificed the runner to second and third but a strikeout ended the inning with no further runs crossing the plate. In the Tiger’s fourth, a two-out single by Fountain was the only offense with a ground leaving her stranded on the bag.
Sneads had a one-out reach on an error by Hannah Stephens in the fifth. Stephens moved to second on a sacrifice by Georgia Scott but no runs crossed the plate. Graceville was retired in order in their half of the fifth inning.
Sneads went down in order in the sixth inning with Graceville plating four runs to make it an 11-3 game. With one out, Skinner singled and scored when Bellamy reach on an error that allowed her to land on second. With two outs, Fountain singled to put runners on the corners for Wesley’s two RBI double. Daniels and Harvey followed with back-to-back singles that scored Wesley before a fly out ended the inning.
Sneads added their final run in the top of the seventh inning. Michaela Edenfield led off by reaching second on an error. Lamphere drew a walk with both runners advancing on a wild pitch and Edenfield scoring on the play. Kylie Stephens doubled to put runners on the corners but three straight outs ended the threat of a comeback win and gave Graceville the 11-4 win over the Lady Pirates. 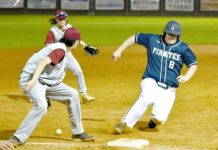 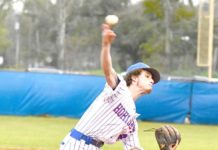 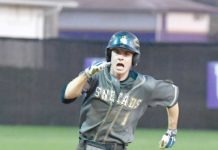