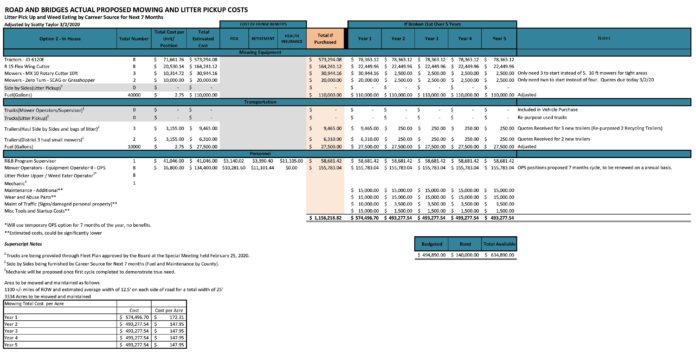 The Jackson County Board of Commissioners met in special session Tuesday afternoon to finalize the mowing program for the county right of ways for the 2020 ‘season.’ The contract has been a thorn for the past few years with no positive results from the last two mowing contractors. The Board had opted to go in-house with the county leasing the necessary equipment. Chairman Clint Pate, commissioner Eric Hill, and commissioner Willie Spires were present with commissioner Jim Peacock present by phone. Commissioner Chuck Lockey had a previous engagement and was unable to attend as he told the Board at the time the meeting was scheduled.
Scotty Taylor addressed the Board and outlined the costs by year over a five-year period. Taylor asked for approval of the proposal submitted to the Board outlining the costs and the purchase of the remaining items needed. He also requested approval of a proposed FTE position for the Road and Bridge Supervisor position for the County. The approval of proposed OPS positions to be utilized for the mowing program.
Sheriff Lou Roberts requested Taylor keep his office apprised of the roads being mowed and the times so that his department could keep an extra eye for the equipment due to theft issues. Taylor readily agreed to keep his department up to par on where the mowers and equipment would be.
Commissioner Eric Hill made the motion to approve the hiring of a road and bridge superintendent with a second by Commissioner Jim Peacock. The motion passed 3-1 with Commissioner Willie Spires electing against.
Commissioner Eric Hill made the motion to approve the OPS positions with a second by Commissioner Jim Peacock and passed 4-0. The final motion to accept the mowing proposal as it was presented was made by Commissioner Hill with a second by Commissioner Peacock and passed 4-0.