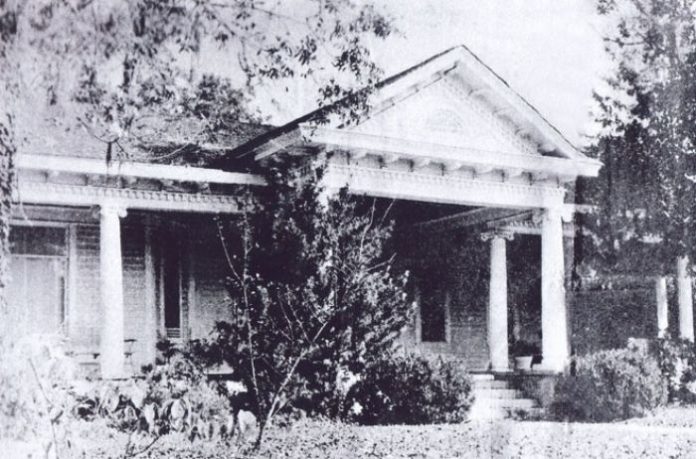 The following is an excerpt from a 1973 article written by the late Retilla Miller Leitch, longtime society editor of The Jackson County Floridan. It describes a home named Coral’s Gables and a Civil War story about “Marianna Day”. – Pat Crisp

The house is said to have been built in the mid 1850’s by the Bullard family and was one of the oldest homes in Marianna. Soon after this article was written, Dr. Gene Pelt and his sons, Drs. Allen and David, purchased the property and the house was moved to Wacissa, Florida, in Jefferson County. Pelt Eye Clinic was built on the home site.

The house was purchased in 1903 by the Massey Burtons. Mrs. Burton’s name was Coral as was her daughter, Coral Davis, wife of Wallace Davis, also longtime residents of Marianna.

The house had nine Doric columns across the front which was common among antebellum homes. There were two gables in the roof, and originally there were 11 rooms with a servants’ house in the rear. Mrs. Davis remembered the cook and the yard man having lived there. At the time of the article being written, the house had only 8 rooms and the house in the rear had been removed. There was a beautiful lead glass door and matching panels on each side, which Mrs. Burton designed. They were removed and used in the Wallace Davis home which was built just off Meadowview Drive north of town.

Mrs. Burton and her daughter were both named Coral and the house had two gables, thus the name Coral’s Gables, which has another story, as told by Mrs. Burton.

She said that many years ago a friend from South Florida was visiting the Burtons and he told them that he was building a new town there and asked permission to name his town Coral Gables. Thus, the beautiful city in South Florida was named for the lovely old home which sat in Marianna for over one hundred years.

The home was furnished with many beautiful antiques. Some were from grandparents and some from great grandparents. There was an antique mirrored china closet which was used to display antique cut glass and silver family heirlooms. Some of the furniture and other items were shipped in the early 1900’s by ship down the Chattahoochee River to Neal’s Landing and hauled to Marianna by wagon. While doing some remodeling in the attic, they discovered some pewter and silver pieces they believed to have been hidden there during the Civil War.

What happened at the home during the years of the 1800’s following the war is not documented here by this family, but there is a very interesting story which reportedly happened during the Battle of Marianna, told by the late Dick Hinson, which his Great-aunt Elizabeth Lawrence Hinson told to him many times as he lived across the street in the home owned by his parents. Miss Elizabeth grew up in the Bullard House, as it was known before “the war.” She related this story which happened when she was about 14 years old, beginning when the Union soldiers marched into Marianna on September 27, 1864.

She said that the women and children were all gathered in the house when the soldiers came into town on Lafayette Street, right in front of the house. She stated that she was very venturesome in nature, and without anyone knowing, she ventured out behind the house, climbed on top of the chicken house and was in a perfect vantage point to see the street and the battle taking place at the churchyard. When she was missed inside, someone came looking for her, and she complained to them that strangely, there were lots of hornets around her. They explained to her that “the hornets” were bullets flying past her from the fight nearby. Family members kept one of the bullets for a keepsake.

Mrs. King lived to be 88 years old. The following is taken from a 1936 Jacksonville newspaper article which quotes her. “You know we all had big families in those days; the one thing which everybody had was plenty of kinfolks. I had three aunts, and ‘that day’ they had gone down to the courthouse because they heard that Uncle Thad–Dr. Thad Hentz–had been captured and was held there, a prisoner.” This proved true; he had been captured, and was later sent to Elmira, New York, where he remained a prisoner of war until May, 1865.

“We children, of course, were left at home. We had been hearing the firing all morning. Every young boy who could carry a gun, and all the old, old men had gone out earlier in the day. After a while an African American soldier came by. Seeing the two of us, little six-year-old Lee and me–swinging on the gate and peering uneasily up and down the road–he said, ‘Your pa has been shot, he’s down there at the blacksmith shop.’”

“I waited to hear no more. I went flying down the road, followed by little Lee, whose short legs could not keep up the pace I set. Some Union soldiers came galloping up on horses and said, ‘Got anything to dig graves with?’ ‘No’, I hollered back at them, hardly pausing in my frenzied haste. ‘No, the soldiers have already come and taken every spade and shovel on the place.’ Around the corner, past little St. Luke’s Church we sped, and there back of the church was the blacksmith shop. I peered fearfully in. Should I see Pa stretched out on the floor, scarcely breathing, with blood all around him? No, there he sat, with his foot in the big round wash tub the smithy had used in cooling some metal parts. There was water in the tub, and he was trying to bathe the wound in his leg. A bullet, whizzing through the window of the little blacksmith shop where he had taken refuge had barely missed him, clipping a hole neatly through the side of the tub. We have that bullet still.”

“A Yankee sergeant came in and said in a deep gruff voice, ‘What’s the trouble here?’ But his eyes were kind as he looked down at us. Lee had started crying and when I saw her crying it made the tears come in my eyes, too.”

“Here, here,’ he said, ‘what are you crying for? I’ll help you get your Pa back home.’ He went out and in no time at all he was back with a dump cart, one of those little carts on two wheels with which Nick, our gardener, used to bring up cantaloupes and watermelons from the melon patch. Somehow we could not get Pa fixed on that cart in a comfortable position, so I walked behind and held up his leg. It must have been a queer procession, the sergeant walking on in front, Miss Sallie and Mrs. Britt (neighbors), with their arms full of bandages, Lee sniffling behind me, and last of all Pa’s squirrel dog, Bunk, with his tail dropping. But we got him home and put him to bed. And then be began shaking. Seemed like we could not get enough covers on him to make him warm.”

“I’ll go over to my house,’ Aunt Hat said, ‘and get some more blankets: I’ll bring him some soup. We killed a big turtle yesterday, and I left a pot of turtle soup cooking on the stove. That will warm him up.’”

“‘Better let me go with you,’ the sergeant said. His name was Fred Fuller, and he was from Portsmouth, Maine. ‘There is still some skirmishing in the streets; it will be safer for you if I go along.’ So, he went with her and helped her get the blankets off the beds. ‘Take all your clothes with you,’ he told her. ‘Take your feather bed, too. The soldiers will pillage this place.’”

“As they lifted the feather bed he caught sight of a big oil painting hidden there for safe keeping, a girl in her twenties, but painted many years ago, as was apparent from the dress; he looked at it with humble admiration.”

“‘It’s Caroline Hentz, the author,’ Aunt Hat said. ‘Caroline Lee Hentz!’ Sergeant Fuller exclaimed. ‘Why, I have read her Earnest Linwood and The Long Moss Spring over two or three times. They are two of my favorite novels. Take this portrait with you.’ He carried it in his arms, and the old horse carried a bundle on either side, clothes and feather beds. When he left to go on with his company, everybody in the family thanked him for all his kindness.”

“‘Goodbye and God bless you,’ Pa said, shaking hands with him. ‘I wish there was something we could do in return for all you have done for us.’”

“‘Well, I’ll tell you,’ the sergeant replied, twisting his cap nervously in his hand. ‘There is one thing I would be glad if you would do for me. I’m having to leave my pal behind. He’s too badly wounded to take with us. He’s over there in the hospital.’ (They were using the school house for a hospital, and it was full of wounded soldiers.) ‘If there’s anything you can do for Pollard I’d thank you kindly.’”

Miss Elizabeth further states, “We did manage to send many a dish of jelly and fruit and chicken broth over to his friend. Oh, my, it seems a long, long time ago, but no matter how many the years, they will never erase one day off the calendar for me, and that day was “Marianna Day.”

Note: September 27, 2014 will commemorate 150 years since this event took place. Thank you, Retilla, sweet friend, for sharing such a beautiful story.