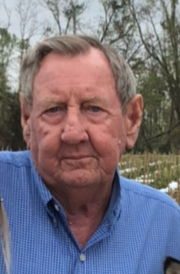 Charles D. Griffin, 83, of Chattahoochee, Florida passed away peacefully in Tallahassee, FL with his family by his side, on Friday, October 28, 2022.

Charles was born at home in Sneads, FL on September 28, 1939, to Q. Z. Griffin and Eunice Lanier Griffin. He was a graduate of Sneads High School. After high school, Charles attended Perkinston Jr. College in Mississippi on a basketball scholarship and earned his AA Degree. He came home and attended Troy State University to earn his BS Degree in education and taught math, history and coached at Sneads High School and at Cottondale High School. In 1966 he met and married the love of his life Patricia Keel and together they raised their daughter, the apple of Charles’ eye, Paige. Charles spent thirty years of his life in dedicated service to the Jackson and Gadsden County School Systems respectively as a teacher, a coach, an assistant principal, a principal, and a county office supervisor during his tenure. In 1974 he earned his master’s degree from FAMU and became assistant principal at Carter Parramore High School. He later moved to Chattahoochee High School as assistant principal and subsequently became principal. In 1990 he became principal at Greensboro High School and sometime later moved to the county office as an administrator / supervisor and retired from there in 1993. Charles was an avid Florida Gator Fan and golfer. He always loved a good trip to Biloxi. Charles will be missed by all who knew him.

Charles was preceded in death by his parents and a brother, Ronald C. Griffin.

A Funeral Service for Charles will be held on Monday, October 31, 2022, in the chapel of McAlpin Funeral Home at 2:00 PM Eastern Time. Interment will follow the funeral service in the First United Methodist Church Cemetery in Cottondale, FL. A time of visitation will be held on Sunday, October 30, 2022, from 4:00 PM – 6:00 PM Eastern Time at McAlpin Funeral Home.