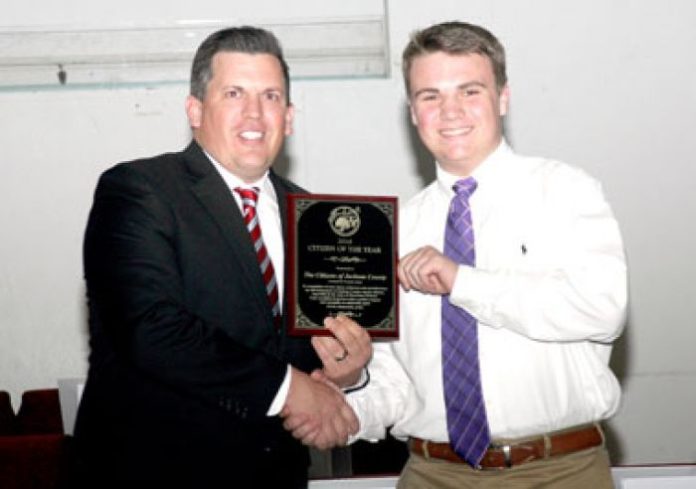 The Chamber of Commerce took a different avenue with their 91st Annual Chamber Banquet recognizing the 2018 year. Director Tiffany Garling welcomed everyone and turned it over to Jackson County Administrator Wilanne Daniels to lead the invocation followed Arthur Obar leading those present in the Pledge of Allegiance.

The Chamber’s 2018 chairman, Martin Leon presented Georgeann Adkison with this year’s Arthur L. Kimbrough Board Member of the Year Award.

Nominations are normally taken for the Jackson County Citizen of the Year but this year, Chamber Executive Director Tiffany Garling opted for something different in light of Hurricane Michael’s appearance in October of 2018, “The board just didn’t feel right about ONE citizen of the year when so many people stepped up in Jackson County following Michael.”

Accepting the award on behalf of the citizens of Jackson County was Trent Antley, freshman at Marianna High School. Antley is an honor student, class vice-president and a member of the junior varsity and varsity football team.  He is the son of Dr. Rick and Mrs. Sara Brunner of Marianna, and Mr. Reese and Mrs. Ashley Antley of Port St. Joe. Antley accepted the award from incoming Jackson County Chamber of Commerce Chairman Tyler Lipford.  Garling said calling on Trent Antley to accept the award on behalf of the citizens of Jackson County was one the entire board agreed on. She said Antley more than stepped up to the plate during the aftermath of Michael, “He was constantly at the EOC, helping in every way possible. I think he had as much time there as anyone. He helped man the EOC for days and days after Michael, checking in workers from state, military, EOC, anyone who needed guidance, Trent had an answer for them. We hope this will encourage other young people to commit to our community the way Trent has.”

Incoming Chamber Chairman Tyler Lipford accepted the gavel from outgoing Chairman Martin Leon and requested everyone present to help Re-Imagine Jackson to continuing to contribute in any way to our community. He said four months after Michael, our community is continuing to work though recovery efforts while putting in place plants for the long term of Jackson County.