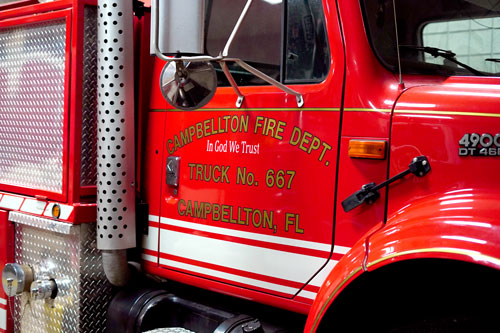 By Shelia Mader
Everyone is well aware that state and county agencies struggle with budgets and financing their departments. For volunteer fire departments, the struggle increases with very little money allotted for them to run their departments.
Salaries are not an issue since it is as the name says, ‘volunteer’. Campbellton Fire Chief Danny Taylor has never met a piece of salvage he didn’t like. Some years back, they were in need of a brush truck. As their luck would have it, Gulf Power had the misfortune of having one of their bucket trucks stolen. It was located in Mississippi and had some damage to it, enough that Gulf Power opted to scrap the truck for lack of a better word. No sooner than Taylor received word that there was a piece of equipment available, he was there to claim it.
At the time, the Army Surplus Store was located in Marianna and various items needed were available. Taylor found an Army drinking water tank. Taylor said, “We mounted it in a truck and we put up a pump on it. So, now that’s our brush truck and we also do other things with it too. We’ve got a set of jaws on it and a little bit of first response medical stuff, things such as that on it.”
Basically, they took a fairly small bucket truck and made a usable first response truck with it. Taylor said, “Then we got a light bar a few years ago but we make a lot of trips on 231 and it was just not lighting things up the way we wanted them to be. So the sheriff’s department (Jackson County Sheriff’s Department) gave us two light bars. You know they run reds and blues. We took two and made one out of it so we have a lot better light bar than we originally had. We did this back last year and through time I converted the two and we’ve had it three or four months.”
As far as the brush truck, Taylor said he had been firefighting for quite a while and during that time, he’s had the opportunity to make the most of a lot of salvage vehicles. The conversion of the bucket truck to a brush truck has been very helpful to their department, “We can take this on short runs to clear trees off the road so we don’t have to bring out the fire trucks, it’s a lot of help. We use it at structure fires. It is a useful truck for sure.”
Kudos to the volunteer fire departments for going above and beyond what is expected of them day in and day out.