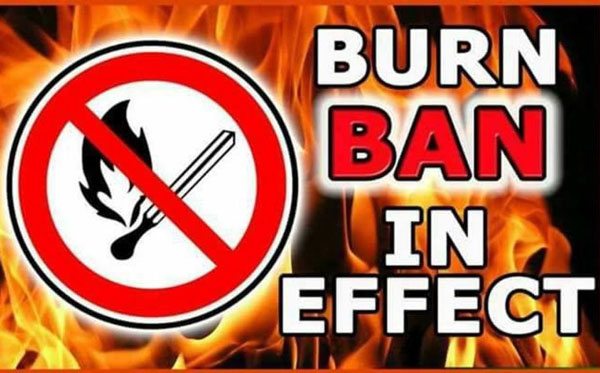 The Jackson County Board of Commissioners met in special session Monday morning, September 30, 2019, to discuss a burn ban for Jackson County.
Jackson County Fire Chief Charlie Brunner addressed the board concerning the out-of-control fires in Jackson County. The county has been without any substantial rainfall in at least 30 days. Brunner said, “As you are all aware of the weather conditions facing this county, I come before you asking for an order prohibiting any outdoor burning set forth by the Board of County Commissioners. The order will expire obviously when weather conditions improve.”
Brunner gave some numbers concerning the number of calls his department alone, “Since Friday, we have responded to eight outdoor fires, including the 57-acre fire in conjunction with several volunteer fire departments and the Florida Division of Forestry on Blount Road in the Grand Ridge area.” Brunner said the Florida Forestry is returning to that area today to make sure all the remnants are extinguished. Brunner added, Since Friday the 20th, we have responded to 32 fires in the county and since the 13th, we have responded to 52 outdoor fires. We don’t foresee conditions improving for at least the next 10 days according to the weather, so therefore we are asking for a vote by the Board for a ban on all outdoor burning that includes cooking fires as well. The Florida Forest Service has ceased issuing any burn authorizations over eight feet in diameter.”
David Kent from Florida Forestry said that with the media coverage about the burn ban, he is hopeful that will help greatly, “We’ve also brought in a strike team into the county and they are going to mop up these fires we have now in the county. We are also putting a task for together to bring in another crew of dozers to help us with the fires that we have or expect to have.”
On a motion by Commissioner Jim Peacock and a second by Commissioner Willie Spires, the motion passed 4-0 (Commissioner Chuck Lockey was absent). The motion included allowing County Administrator Wilanne Daniels to lift the ban when forestry says conditions improve to lift it.
In another matter, Daniels addressed the board concerning a request for a permit for fireworks for the October 10, Spirt of Jackson event to be held at Citizens Lodge. The commissioners agreed to the permit IF the burn ban has been lifted. Fireworks will not be permitted.
Wednesday morning, the Times contacted County Administrator Wilanne Daniels, “We will work with the fire chief t make the call possibly lifting the ban for the duration of the show. It all depends on rain and whether they can safely saturate the area. The board gave me the authorization in that meeting to life the burn ban when the times comes. After the meeting, Charlie (Brunner) and I talked through the fireworks and he believes we can safely do it – especially if we get rain this weekend. Nothing has been officially decided, but we have to have a tentative plan. We also have a board meeting on Tuesday before the event if we need it.”