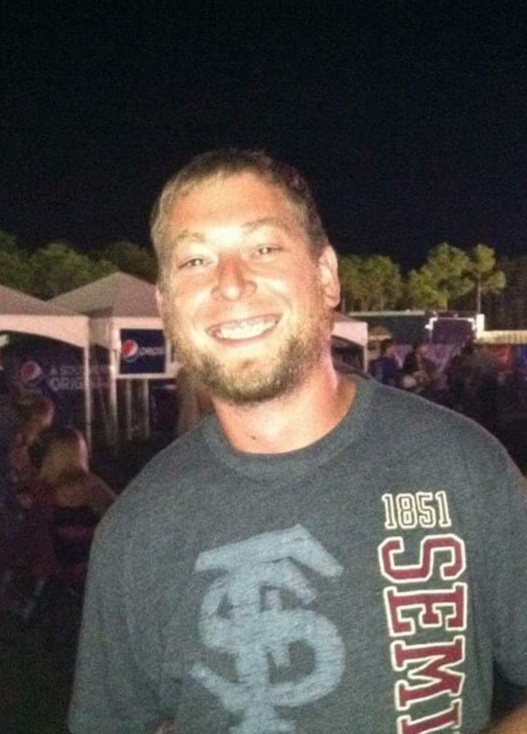 Blake Hamilton, 38, of Sunny Hills, died Sunday, May 30, 2021 at his home surrounded by loved ones, after  courageously battling cancer. He was born October 10, 1982 in Marianna, FL to Wayne and Joan Hamilton. He was a co-founder of the Marianna Mustang Club and a member of the International Brotherhood of Electrical Workers (IBEW), from where he retired. He loved drag racing cars and always had a passion for mustangs, racing and Florida State Football. On April 30, 2011, he married the love of his life, Kristin Hamilton in Panama City. They lived their life to the fullest and made the most of every day. They loved their fur baby, Chief Osceola Buchenhorst-Hamilton dearly. He was the center of their world and passed away, at the age 12, just one week before it was discovered that Blake’s cancer had spread to his brain.  Blake was preceded in death by his grandfather, Robert “Chubby” Thompson; grandmothers, Betty Jean Thompson, Hazel Hamilton; and father-in-law, Robert Buchenhorst.  He is survived by his wife; parents; sister, Miranda Ramaglia (Chris); mother-in-law, Lorena Buchenhorst; brother-in-law, Jason Buchenhorst; nephews, Jackson Ramaglia, Waylon Ramaglia, Ethan Buchenhorst; nieces, Hannah Buchenhorst, Bailey Buchenhorst; aunts, Sandra Harrison (James), Barbara Gallira (Jack); uncle, Kenny Hamilton; cousins, Anna Sullivan (Rudy) and son, Jeffrey; Averi Garcia and daughter, Madelin and many other friends and family. Funeral services will be 2 PM Friday, June 4, 2021 at James & Sikes Maddox Chapel with Kevin Yoder officiating. Burial will follow in Pinecrest Memorial Gardens with James & Sikes Funeral Home Maddox Chapel officiating. The family will receive friends one hour prior to the service. Expression of sympathy may be made at www.jamesandsikesfuneralhomes.com