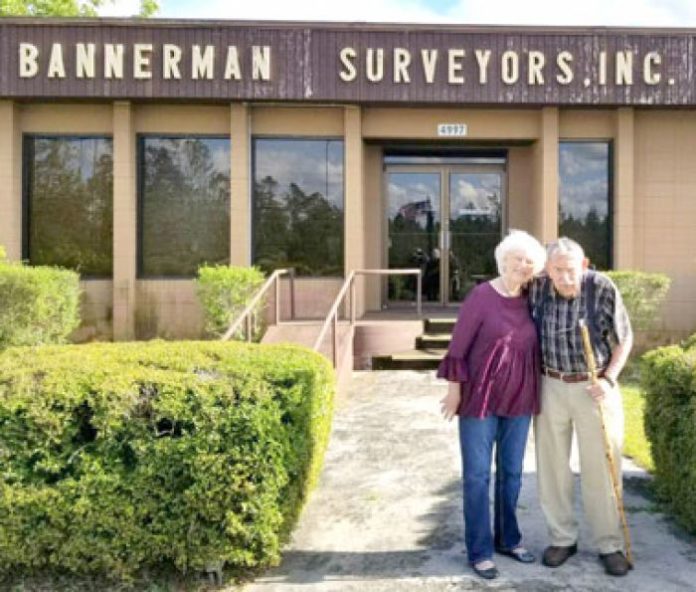 Robert A. “Buddy” and Sharon Bannerman’s names are synonymous with surveying in Jackson and surrounding counties. Last week, their time in the surveying world came to an end after over 50 years of service in the Panhandle.  The building and records have been sold.

Bannerman Surveyors opened in Tallahassee in 1945 under Buddy’s father, Robert C. Bannerman with Buddy beginning his career in surveying under his tutelage. Buddy opened his office in Marianna in 1970.  In 1988, Sharon and Buddy Bannerman became incorporated as Bannerman Surveyors, Inc. in Marianna.  At the peak of the business, they had as many as four crews running with four on each crew. Their son, Scott worked for them during his training years until his certification as well as their son-in-law Gary (Tew).

Buddy Bannerman told of how he came to open an office in Marianna, “The reason we wound up in Marianna was his grandfather Henry Anderson Bowles was a prominent politician in Jackson County. He served as clerk of the court, the tax collector and the sheriff. My mother was from here. My father, according to my mother was a principal surveyor and engineer.”  Sharon Bannerman downplayed her role in the company but Buddy Bannerman was quick to say, “You were half of me and half of the business.” Bannerman is also very proud to have served in the Green Berets for 18 years, serving directly under General McMillian.

Their service in Marianna has not been strictly business and career oriented. Both Buddy and Sharon Bannerman have been faithful members of the First Presbyterian Church for 45 years, with both having served as elders. Buddy Bannerman was President of the Florida Society of Professional Land Surveyors, and was also registered in Colorado for many years. He was a member of the Lions Club for 60-plus years and was president twice.  Bannerman was bestowed as a fellow in the American Congress of Surveying and Mapping (ACSM) and the National Society of Professional Surveyors (NSPS). Sharon Bannerman has been a very active member of the Marianna Women’s Club and served a term as president, was a 25-year volunteer at Jackson Hospital as a Pink Lady, and a member of the Red Hat Society.

Bannerman said many changes have occurred since he started out as a surveyor, “Everything is done by GPS now, interlocks and satellites have come a long way.”

Sharon Bannerman said, “With legal descriptions, when we started back in 1974 when Buddy and I got married, if we made a mistake in the legal, we had to type it all over again.  Now, it’s a breeze.”

Sharon and Buddy Bannerman have six children among them and are blessed to have them all living in Jackson County.  Susan (Rance) Massengill, Laurie (Greg) Massengill, Deborah Matthewuse, Kathy McCrary (Rodney Carpenter), Nancy Tew (Gary) and Scott Bannerman (Mendy).  They have eight grandchildren and seven great grandchildren with one on the way.