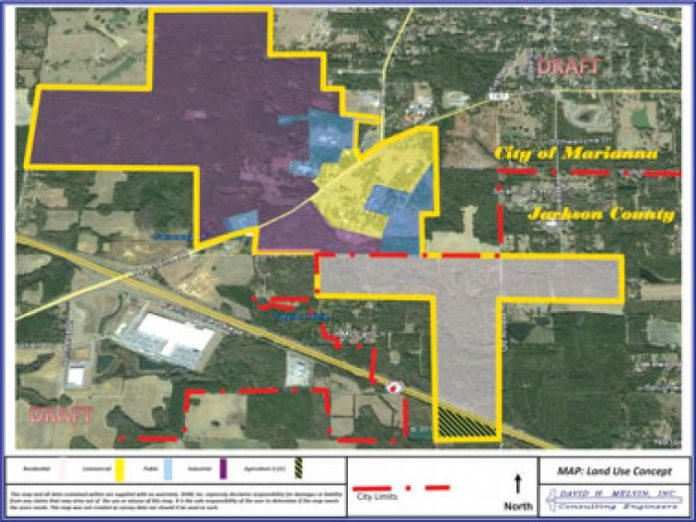 Rick Pettis addressed the board about the future plans for Endeavor, the property and buildings that have been assigned, and told of the long-term effort that will be required to make the Autism program become what it is projected to be. Pettis presented a map that outlined some of the designated areas.  The area in blue is land that is set aside for future indoor public uses. One of those areas is where the sheriff’s office is moving. The Jackson County Sheriff’s Office has been given property at the former JJOT facility.  It is presently being renovated and will not be the jail but rather the sheriff’s offices and the 911 center. Work is presently in progress on that building.

The Autism Center is proposed to be where the vocational area was and they are plans to be looking for expanding that concept to include other vocational training as well as other groups. Pettis said it’s hopeful to potentially have a residential area for that vocational group.

The north side of 276 is the area that is directly behind the jail and the county’s alternative school.  Pettis said the county itself may end up taking that building sometime down the road, once the school board vacates that property in 2021-2022. Pettis said it is a possibility to see county administration take over some of that property.

The ‘yellow’ area on the map is proposed for commercial development. It could be stores, resale, offices, or mixed use.  That is the main part of campus that you see when you drive though the area.

Pettis said, “We actually have a project right now that we are working that is considering come here, and putting a 50,000 square foot manufacturing facility there. That’s already moving forward. There is a lot of promise and a lot of parties we are talking with, housing developers and other manufacturers, various business owners. All kinds of things that could go out there but it may take years to get there. We have a lot of work ahead of us.”

Following Pettis’ presentation about the future of Endeavor, he discussed the autism school. He said the county and others have been entertaining three or four different parties who have expressed some level of interest in potentially being the managers of that facility, to help put that together. Pettis said the biggest concern right now for the facility is sustainability for the facility. There is $750,000 which is budgeted for that, for the start of that and the cost of the building that was not incurred but both are considered soft costs Pettis said.  He said it works out to about $80,000 a year in costs for salaries for the first three years. Other costs would be for software and materials. Pettis said there was enough money to create a framework for the school but not enough money there to fund it for three to five years. There will have to be sustainability money through tuition with a lot of work to be done on that.  This is viable according to Pettis as there are interested parties already.

The Autism Board was given the proposed by-laws to review with the vote on them coming at the next meeting.