Just before 7 PM on June 10, 2020, the Jackson County Sheriff’s Office Communications Center received a call in reference to two females and a small child acting in a suspicious manner and possibly attempting to steal merchandise at a convenience store located at the Hwy 69 / 1-1 0 interchange in Grand Ridge.

One of the females with the small child passed a note to an employee of the store stating that she felt like they were in danger. As the officer responded to the location, he/she was directed to a vehicle that was parked in the parking lot of the business. When the officer was approaching the vehicle, the driver, a male subject, along with a female passenger, immediately sped away from the area traveling southbound on Hwy 69 towards Calhoun County. Jackson County Sheriff’s Office Communications Center obtained information from one of the individuals who was a previous occupant of the vehicle. that the driver of the fleeing vehicle was currently being sought after by Tennessee authorities for an attempted murder charge in their jurisdiction. It was also learned that the driver may be armed with a firearm.

As other officers were dispatched to respond to the store, the initial officer on the
scene pursued the suspect vehicle southbound on Hwy 69 at speeds well over the posted speed limit. Calhoun County Sheriff’s Office, Blountstown Police Department and the Florida Highway Patrol were notified of the impending pursuit into Calhoun County. The driver took evasive measures by traveling on dirt roads while trying to prevent being apprehended. The vehicle eventually traveled northbound again towards Jackson County, where the driver subsequently lost control of the vehicle in a curve of the dirt road. The driver was able to flee on foot to a wooded area, leaving the female passenger at the scene. The passenger was transported to Calhoun-Liberty Hospital by

EMS Personnel for evaluation and treatment for any potential injuries she may have received during the accident.

A check of the vehicle’s license plate revealed that it had been reported stolen by Kingsport, Tennessee Police Department. Further preliminary on scene investigation revealed that the driver who fled the area was identified as Daniel Lee Powell, a 29- year-old white male, from Hawkins County, TN. Calhoun County Sheriff’s Office officials arriving on scene requested K9 tracking teams from the Calhoun County and Liberty County Correctional Facilities to assist in tracking the driver of the vehicle.

Efforts to locate and apprehend the driver continued throughout the night, utilizing the K9 tracking teams and air support from the Calhoun County and Bay County Sheriff’s Offices. Additional staff and resources were provided by the Jackson County Sheriff’s Office, FHP, FWC, and the Blountstown Police Department to assist with the investigation, as well. As the investigation continued throughout the night, communication with the Tennessee authorities revealed that the subject was a wanted fugitive from justice in their area for a charge of attempted murder. He was also being sought by the U.S. Marshall’s Service, and has an extensive criminal history. It was learned by the investigators with the Jackson County and Calhoun County

Sheriff s Offices from Tennessee Law Enforcement that the subject they were searching for may have previously been driving a stolen black Dodge Challenger that was possibly concealed in the Jackson or Calhoun County area.

On June 11, 2020, Calhoun County officers responded to a stolen vehicle and firearms theft that had occurred in close proximity to where the vehicle crashed. The stolen vehicle description was relayed to surrounding agencies. Just before 8:00 AM on June 11, a member of the Jackson County Sheriff’s Office observed the reported stolen vehicle traveling northbound on Hwy 73 entering the city limits of Marianna.

Officers from the Jackson County Sheriff’s Office and the Marianna Police Department were dispatched to the area of Pearl Street and Wynn Street in the city of Marianna, after receiving information that the subject has been known to frequent a residence in that area. The vehicle was observed parked at the described residence by the officers, but as they approached, the subject fled on foot in a northerly direction towards the downtown area. He was running through residential properties and behind residences to avoid being detained. An officer with the Marianna Police Department was able to apprehend the subject as he was coming out from behind a building after a brief struggle.

During the course of the investigation, it was learned that the previous stolen vehicle described by the Tennessee authorities, the Dodge Challenger, could possibly be located in a wooded area west of Cottondale. The Cottondale Police Department was notified and responded to the described area. With the assistance of the Cottondale Police Chief and Calhoun County Air Support, the vehicle was located abandoned in an area off of Cutchins Road.

The subject, Daniel Lee Powell, is being detained in the Jackson County Correctional Facility as a fugitive from justice from the state of Tennessee for the charge of attempted murder. Further charges are pending to include grand theft auto (2 counts), burglary, theft, grand theft of firearm, possession of a firearm by convicted felon, and fleeing and attempting to elude LEO. 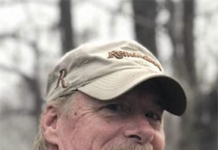