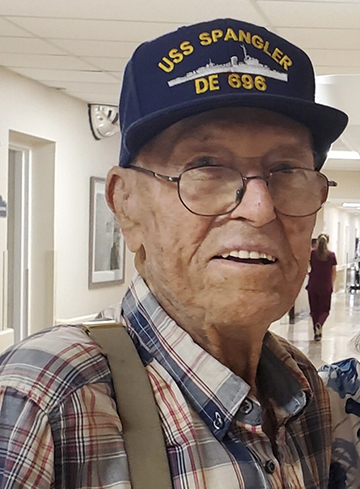 Andrew Jackson “AJ” Paulk, 97, of Bethlehem Community, Bonifay, Florida died Monday, October 19, 2020 at his home. AJ was born in Florida just south of his Black, Geneva County, Alabama address on March 26, 1923. He was the 13th child born of his father’s 18 children and the 6th child born of his mother’s 11 children. AJ’s father, James Joseph and his first wife Ida Bell Jerkins had 7 children together before her death.  AJ never separated the two families by using the word half.  They were all his brothers and sisters and meant the world to him.  AJ married his high school sweetheart, Mary Miller, on November 29, 1942.

He joined the U.S. NAVY after Pearl Harbor and served as a destroyer sonar operator in numerous Pacific battles including Iwo Jima, Leyte Gulf and Midway. He returned to dredge boats after the war and worked his way to Captain of the boat covering waterways from Corpus Christi to Chicago to Pittsburg and Port Saint Joe. AJ had a riverboat captain’s license as well as an airplane pilot’s license and was on a destroyer during a typhoon in the Pacific Ocean and a river boat in a hurricane on the Mississippi River.

He and Mary expanded her childhood family farm and he retired at age 61, AJ spent the next 36 years enjoying their farm, the cows, equipment, cars, motorcycles, family, dogs, building ponds, and having a black cup of coffee several times a day.