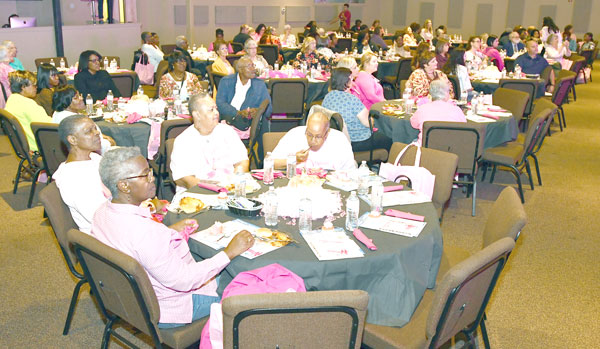 ‘A Crystal Clear Fight for the Future’ was the theme for the 15th Annual Breast Cancer Awareness Symposium hosted by Jackson Hospital, North Florida Cancer Care, Dr. Steven Stokes, and Jackson Hospital Foundation. It was held at Rivertown Community Church.
Amy Milton, Director of Public Relations and Marketing for Jackson Hospital welcomed the crowd and thanked them for attending. Pastor Paul Smith gave the invocation and blessing. A delicious meal of lasagna, salad, roll, dessert and beverage was catered by Jackson Hospital and served by Chipola College of Nursing students.
The event took on a different schedule this week with Dr. Thomas Brown and Dr. Steven Stokes speaking to the crowd before Zillah ‘Zip’ Fossum, breast cancer survivor spoke.
Fossum provided those present with entertainment, choosing the positive road in her battle with breast cancer. Fossum is now six years in recovery and perhaps brought the crowd to life when she said, “I thought breast exams was the husband’s job.”
Following the speakers, there was a round of question and answers to the delight of everyone. One area addressed by Dr. Rick Brunner was reconstructive surgery. Brunner answered questions about the surgery, risk factors and time for reconstructive. Brunner said he recommended waiting two years before reconstructive surgery. When asked why two years, his theory is you’re going through enough with your body. You don’t always know for sure that there is not going to be a reoccurrence. In most instances in following up, if you require reconstruction, it’s more surgery so usually that cancer is more involved so you are going to have a follow up chemotherapy, radiation or both. Brunner said you need to allow your body to go through all of that and recuperate before you put yourself through surgery.
Jackson Hospital extended special thanks to Paul Smith and the Rivertown Community Church Staff family, Chipola College School of Health Sciences – Nursing Students, Jackson Hospital Dietary Department, Jackson Hospital Decorating Committee, Jackson Hospital Foundation Chairman Jill Miller, Jackson County Association for Retarded Citizens, Jackson Hospital Auxillary, Kindel Awards.
Following the closing remarks and grand prize awards, a very short social time was held before dismissal.